Groom Park Jong-woo makes a heart with his hands prior to his wedding on Sunday at Raum, a wedding hall in Gangnam, southern Seoul. [NEWSIS]

Footballer Park Jong-woo was married on Sunday. Park was deferred to receive a medal by the International Olympic Committee for holding up a sign that read “Dokdo is our land” during a celebratory ceremony after the Korean soccer team beat Japan in the bronze-medal match at London Olympics last year. However, it was decided that he would receive his medal in February after a disciplinary hearing.

Comedian Seo Kyung-suk poses for the camera as he came to congratulate footballer Park Jong-woo on his wedding, which took place Sunday in Gangnam, southern Seoul. [NEWSIS] 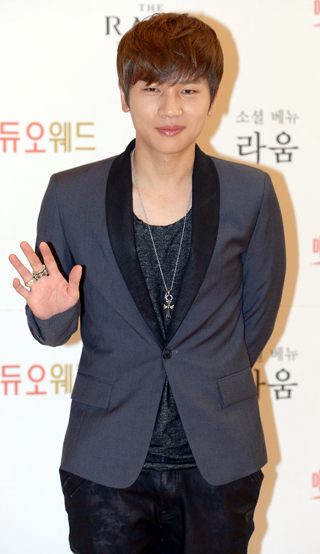 K.Will waves before footballer Park Jong-woo’s wedding on Sunday in Gangnam, southern Seoul. He sang to congratulate the newlywed at the wedding ceremony. [NEWSIS]