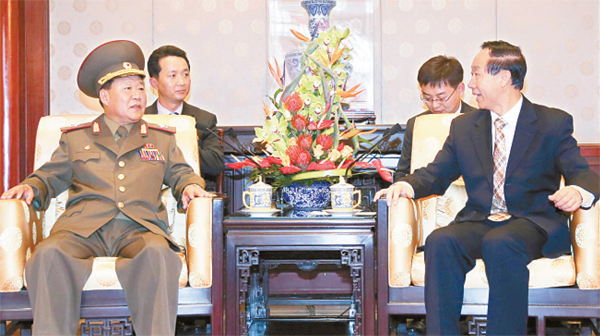 A special envoy of North Korean leader Kim Jong-un has been sent to China for unspecified reasons as Pyongyang feels the pinch of international sanctions with which Beijing is cooperating.

But the KCNA didn’t disclose the purpose of the visit or any other specific details like Choe’s schedule.

It is the first time that North Korea dispatched an envoy to Beijing under the rule of Kim Jong-un, who succeeded his father Kim Jong-il following his death in December 2011.

The delegation clambered into 11 luxury Mercedes-Benz sedans parked on the runway and departed for Diaoyutai State Guesthouse in Beijing, sources told the JoongAng Ilbo.

Sources told the JoongAng Ilbo that Choe had a luncheon with Wang and discussed a variety of issues, including the North’s nuclear weapons program, the closed Kaesong Industrial Complex and the security crisis on the Korean Peninsula.

During the trip, Choe will deliver a letter from Kim Jong-un to Chinese President Xi Jinping, a high-ranking diplomatic source told the JoongAng Ilbo.

“Choe brought a letter from Kim [Jong-un],” the source said. “As far as I know, he will meet with the president [Xi] and deliver the letter.”

Choe and Wang also reportedly reached an agreement on the resumption of high-level bilateral cooperation between the two countries, which has been mostly suspended since Li Jianguo, vice chairman of the Standing Committee of the National People’s Congress of China, visited Pyongyang in November 2012.

Since the North’s defiant launch of a long-range ballistic rocket in December, China has reportedly blocked all channels for high-level interaction with North Korea in the military, politics and administration.

Choe holds the top position in the North Korean military and is in charge of guarding against any anti-regime ideology. While other military officials have been demoted to four-star general by Kim, Choe remains one of the few North Korean vice marshals.

When Choe and his delegation left the North Korean capital, a series of officials also appeared at its airport to see them off.

Included in that group was Kim Kyok-sik, who was replaced as defense minister a few weeks ago by a little-known three-star general named Jang Jong-nam.

KCNA described Kim Kyok-sik as chief of the general staff of the North Korean People’s Army.

Kim, a four-star general, was former commander of the 4th Corps that choreographed the sinking of Southern warship Cheonan and the deadly shelling of Yeonpyeong Island in 2010.

Since Kim Jong-un took power, Kim Kyok-sik is the third person to be chief of the general staff of the North Korean military.

In July last year, Ri Yong-ho was abruptly dismissed from the post and replaced with Hyon Yong-chol, an obscure 64-year-old general who was promoted to four stars in September 2010 along with Kim Jong-un.

The North Korean envoy’s trip to Beijing came as South Korea and China are in talks to arrange President Park Geun-hye’s meeting with the Chinese leadership next month.

The trip is to include a summit with Chinese President Xi. It will be Park’s second overseas trip and coordinating Seoul and Beijing’s North Korea policies is expected to be a key part.