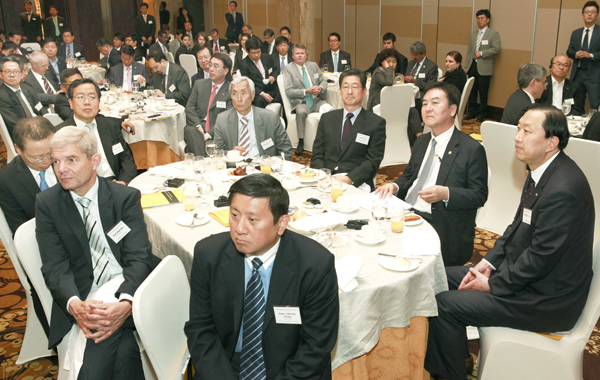 The head of Korea’s financial policy setter and regulator has once again stressed the need to develop a “creative economy,” a key piece of the Park Geun-hye administration’s ambitious economic agenda.

Shin Je-yoon, chairman of the Financial Services Commission (FSC), during his keynote speech yesterday at the Korea Economic Forum in Seoul, said that converging creative ideas, cutting-edge technology and the conventional economy is essential at a time when the business paradigm is shifting.

Korea faces some serious economic challenges from sluggish growth, low interest rates and a rapidly aging population. Such underlying fundamental changes threaten the expansion of the nation’s economy, which has seen flat quarterly growth for the past two years.

The FSC chairman said that even the 17.3 trillion won ($15.3 billion) supplemental budget with 12 trillion won to cover a tax shortfall and the Bank of Korea lowering its benchmark rate from 2.75 percent to 2.5 percent are not enough to turn things around.

These challenges remain despite a strengthening U.S. economy and other positive international developments, Shin said. “Five years on, the 2008 crisis is still not behind us,” he said.

“On the surface, the global financial market seems to be doing better; bold monetary policies and quantitative-easing measures were actively pursued, the U.S. stock market is rallying to record highs,” Shin said. “But, this is not the whole picture. We still don’t know when the European fiscal crisis will return or where the U.S. economy is going.

“In this context, the IMF has lowered its growth forecast in April. It also warned that the global crisis could turn chronic if midterm challenges are not met.”

Shin addressed concerns the U.S. Federal Reserve may wind down its quantitative easing.

“The advanced countries poured in $6 trillion for quantitative easing, which is six times the size of Korea’s GDP,” Shin said. “Abundant liquidity flowed into emerging countries that have solid economic fundamentals. But someday, as the advanced economies start to recover, this liquidity may make a sudden exit and volatile capital flows may trigger another crisis.”

Discussions about the end of quantitative easing have been rampant since a Wall Street Journal article on May 13 reported that U.S. Federal Reserve officials have mapped out a strategy to unwind the stimulus program.

Fed Chairman Ben S. Bernanke expressed concerns that premature tightening of monetary policy would hamper the U.S. economic recovery in testimony to Congress yesterday, but added the central bank could slow the pace of asset purchases.

Shin said at the forum that the government is aware of such challenges and plans to face them.

“The vision is clear: Creative economy. The economy will gain a new edge. A fundamental recovery is required and can only happen when structural issues are resolved.”

The FSC chairman said that as part of the creative economy, the finance sector will be redefined under a new policy based on three “pillars”: creative finance, a solid financial system and financial inclusion.

Financial policy and investment will be changed to make it easier for start-ups, even those that failed once, to access credit, and the joint liability clause that makes it more difficult for entrepreneurs to restart businesses will be eliminated.

Shin touted crowd funding, as well as a fund to liquidize intellectual property for financing purposes.

Another change under the Park administration is the establishment of Konex, a capital market for small and medium enterprises, that will open in July.

“The focus is not only on providing financial support to boost the real economy,” said Shin. “Our goal is to transform the financial industry as a whole.”

The FSC chairman emphasized that a sound and stable financial market is necessary for steering through crises.

“My 30-year career in government has been a constant battle against crisis,” he said. “I found myself facing the 1997 Asian crisis, the 2003 credit card bubble, the 2008 global financial crisis and the recent European fiscal crisis. The experience taught me one very important lesson: A solid financial system is essential to sustain stable growth.”

If necessary, he said, the government will take pre-emptive, sufficient and decisive measures to calm the financial market.

A vital part of stable growth is financial inclusion which he likened to consumer protection.

“The benefits of creative finance and a solid financial system should be shared,” Shin said, adding that the government will reform every component and process of the credit system to lower the bar for low-income and debt-burdened people, while improving the debt structure by encouraging conversion of variable rate loans to fixed rates and paying off principal in installments.

He also said the government will strengthen consumer protection efforts, which is crucial for a flourishing financial industry.