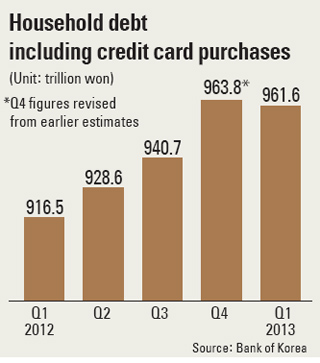 Overall household debt, including credit card purchases, shrank during the first quarter and posted its slowest year-on-year growth since the third quarter of 2011, the Bank of Korea reported yesterday.

First quarter overall household debt, however, saw its biggest drop since the first quarter of 2009, when it fell 3.1 trillion won from the previous quarter. Nonetheless, the debt growth rate was a modest 4.9 percent year-on-year.

Credit card companies have cut services due to pressure to lower their commission rates.

Another factor discouraging credit card use is the government offer of larger tax benefits for debit card use as a way to help restrain debt.

However, the market expects a significant increase in loans in the second quarter thanks to such government measures as tax benefits to boost the real estate market.