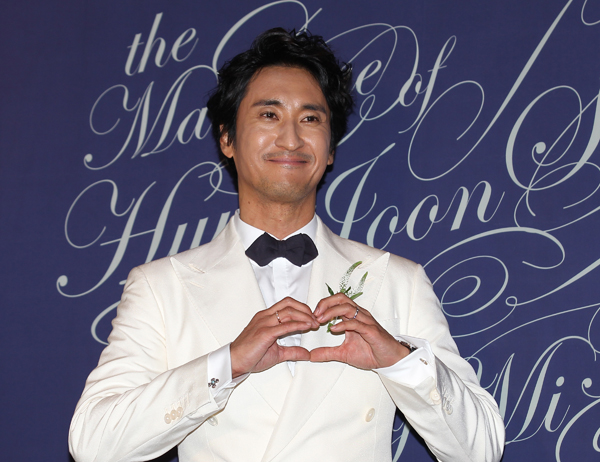 Actor and host of a popular entertainment show Shin Hyun-joon got married Sunday to a bride who is 12 years his junior at the Grand Hyatt Hotel in Hannam, central Seoul. Before the evening wedding, he shared his excitement over the new chapter of his life.

“In fact, I never thought about getting married, but when I first saw my wife, I had a very strong feeling that I would marry this person,” said Shin. “I’m very happy right now, and I’ll do my best to have a good life.”

He also shared the story of how he proposed. After his future bride told him that she thinks the South Sea is beautiful, he booked a room overlooking the ocean in the southern part of the country. When they were by the poolside, he proposed to her while he was giving her a necklace. In a wedding that was closed to media, movie director Lim Kwon-taek of the 2002 movie “Painted Fire” officiated the ceremony. Shin’s two close friends, actor Jung Jun-ho and singer-turned-entertainer Tak Jae-hoon were emcees. The bride is a student studying in the United States for advanced degrees in music. The two got married after dating for six months.