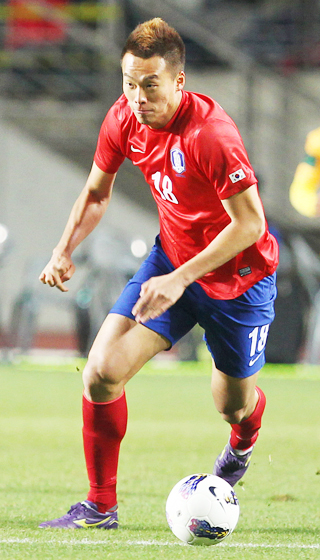 Despite his towering height, Kim Shin-wook has long been a weak presence in a Taegeuk uniform, overshadowed by more charismatic strikers like Lee Dong-gook and Park Chu-young or Europe-based young guns such as Son Heung-min and Ki Sung-yueng.

The leading K-League Classic striker had a chance to turn it around when coach Choi Kang-hee started him as a sole forward against Qatar in March, entrusting him with a crucial mission to snap Korea’s four-game winless streak.

He failed to live up to expectations with mediocre play. Son, Kim’s close friend, saved his face with a last-minute winner but controversy lingers over whether Kim is eligible to be a standard-bearer for Korean football.

“I am to blame for such a controversy to arise,” Kim said at the Seventh Stadium in Dubai yesterday in Korean time. “I did it wrong.”

Called up for Korea’s crucial World Cup qualifier against Lebanon, Kim faces an uphill battle for attention. But, he said it will be different this time.

“As a tall striker, I will try to shake the defenders of the opposing team to create chances for our team,” Kim said. “And if chances are created, I will do my part with a high-flying play.”

Kim, at 1.96 meters tall, is the tallest player in the K-League. Lee Beom-young, the Busan I’Park goalie who has also been called up against Lebanon, is a centimeter shorter.

Taking advantage of his height, the Ulsan Hyundai striker is leading the K-League Classic with seven goals in 12 games. The fifth-year player is well on track to extend his double-digit goal streak to a fourth year.

This is the first year that he is playing in the league without Lee Keun-ho, the 2012 Asian MVP, who is serving his military service in the military-affiliated Sangju Sangmu Phoenix in the K-League Challenge.

The duo reunited on the national team and Kim hopes their chemistry will not be lost against Lebanon.

Lee has not been rusty in the K-League Challenge. He scored eight goals, leading the second division in goals scored. Lee is also strong against the Middle East countries, scoring 11 of 16 goals in the 48 international matches against teams from the Middle East.

“We know a combination of a play we are supposed to create together,” Kim said. “We will try to execute an order from the coach well and make a good combination.”

The Choi squad will practice in Dubai until today and then leave for Lebanon, which it will play against Wednesday morning in Korean time. Korea, the runner-up in Group A, will wrap up the final campaign in its bid for an eighth straight World Cup berth with two home games against Uzbekistan on June 11 and Iran on June 18.

“All the national team players know well how important the three games against Lebanon, Uzbekistan and Iran are,” Kim said. “We will do our best to win the first match against Lebanon at any cost and make the Korean football fans and the people happy.”