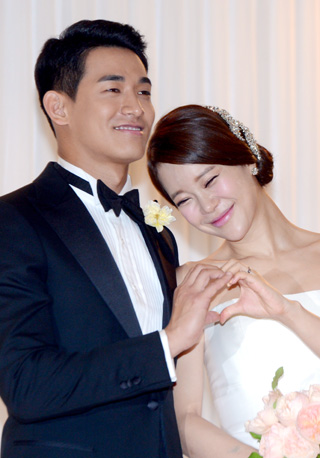 Baek Ji-young wishes she could live with two Jung Suk-wons.

The singer, 37, tied the knot with the 28-year-old actor at the Sheraton Grand Walker Hill Hotel in northeastern Seoul yesterday afternoon. In a pre-wedding press conference, Baek said that she would like to have a son that looks like Jung.

“I don’t know the gender, but I wish it were a son that resembles Jung Suk-won,” Baek said, referring to their baby she has been carrying for three months. “We are planning to have three or so children.”

Baek, who disappeared after the leakage of her sex video in 2000, beat the odds and made a successful comeback, having released six albums since then. She has dated Jung since 2011 and announced their wedding plans last month.

Many of her fellow singers congratulated them, with Kim Sung-soo and DJ DOC serving as emcees for the wedding and Sung Si-kyung and Kim Bum-soo singing congratulatory songs.