In advance of Woori details, a lively debate

In advance of Woori details, a lively debate 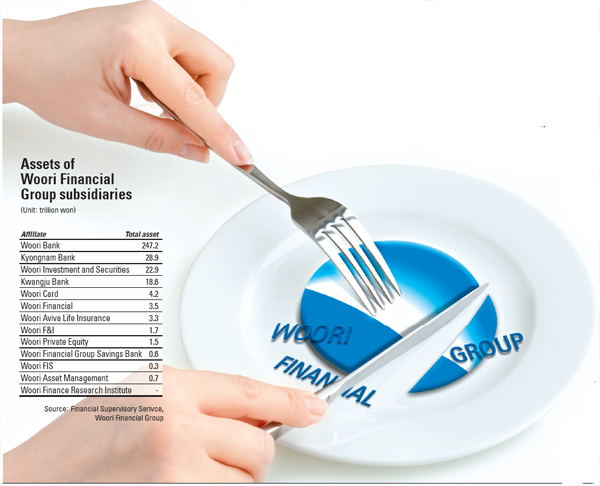 The Financial Services Commission is expected to announce concrete plans later this month on how it will privatize Woori Financial Group, but critics like the group’s labor union are already expressing dissatisfaction and concern over the future of Korea’s largest financial holding company.

Criticism spiked after FSC Chairman Shin Je-yoon remarked last week that the government is “putting more weight on selling Woori Financial by splitting up its affiliates,” taking into account that it would be difficult to find a bidder willing to purchase the giant financial institution whose total assets are 320 trillion won ($285.1 billion).

By law, if Woori Financial Group is sold intact, the buyer must purchase 95 percent of the group’s shares including those of affiliates because a financial holding company is required to own less than 5 percent of its affiliates. If the financial institution is sold separately, the Korea Deposit Insurance Corporation would need to sell only a 57 percent of its stake in Woori.

“We will begin the privatizing process by selling regional banks [owned by the group] like Kyongnam Bank and Kwangju Bank,” Shin said.

Market watchers predict the government will first sell affiliates of Woori Financial Group and Woori Investment and Securities, and then sell its flagship Woori Bank affiliate. If the government sells other major affiliates, such as its brokerage, the value of Woori Financial Group will shrink. This would go against one of the three principles for privatization of the banking group, which is to maximize the retrieval of public funds.

Not all are happy with the direction the government is taking. The Korean Financial Industry Union is concerned that selling Woori Financial will eventually end up benefiting other big financial institutions. 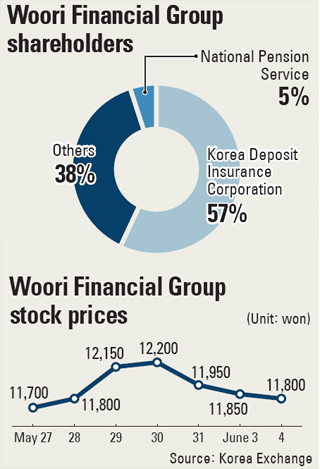 Lee noted that other major financial institutions are likely to purchase Woori Financial Group’s regional banks which would only serve to make Korea’s big financial groups even bigger.

“Regional banks like Kyongnam Bank and Kwangju Bank are capable of surviving on their own,” Lee said. “If they are absorbed by other financial groups by mergers or acquisitions, then for sure they will undergo restructuring and many of their workers will be laid off.”

As for the group’s flagship Woori Bank, the financial union expects it to be acquired by KB Financial Group. To discuss the effects of such a move in the industry, the labor union has created a task force and will come up with its position soon. KB Financial is expected to announce the successor to Euh Yoon-dae as soon as today after the special nominating committee finishes interviewing four finalists: Min Byung-duk, president of KB Kookmin Bank; Lee Dong-geol, former vice chairman of Shinhan Investment Corporation; Lim Young-rok, vice chairman of KB Financial; and Choi Gi-eui, president of Kookmin Card. According to industry sources, one of the main criteria of the committee was someone with the ability to promote merger and acquisition.

However, when KB Financial expressed its intent to purchase Woori Financial in one of the previous government’s three attempts to sell the group, the labor union held a massive strike to protest.

“The sales method hasn’t been confirmed as yet, so we cannot leave out the possibility that the group will be sold en bloc,” he said. The FSC’s public fund oversight committee will announce its final privatization process on June 26.

There are also concerns that the government is needlessly rushing to sell Woori Financial Group. FSC Chairman Shin said last week that the “privatization will be complete by the end of next year.”

Under the Park Geun-hye government, the FSC introduced three principles for privatizing Woori Financial: that it be accomplished as soon as possible, recoup as much public funds as possible and contribute to the development of the country’s financial industry. While previous sales measures focused on maximizing revenues by selling Woori Financial Group as a whole, current measures are largely aimed at expediting the sale by selling affiliates separately.

“Our priority is selling Woori Financial as quickly as possible,” said an FSC official. “The winner among the bidders will be the one that offers the most amount of money.”

Woori Financial Research Institute released a report Monday urging the government to promote the privatization of Woori based on a policy goal of recouping public funds and developing the country’s financial industry by raising the corporate value of Woori Financial.

“The measures should be so that the privatization process contributes to the country’s financial industry so that it is able to overcome the current low-growth and low-profit trend,” the institute said.