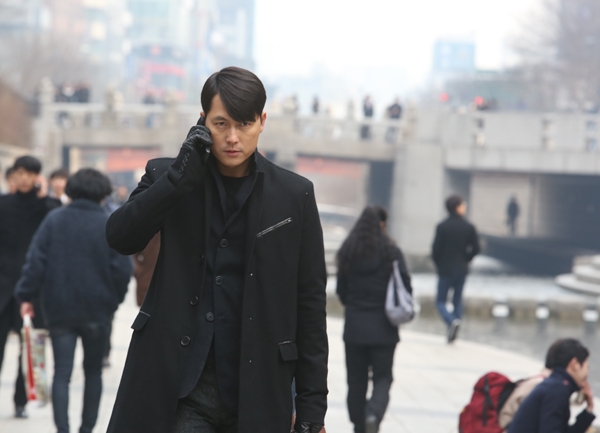 It’s been tipped to be the blockbuster of the summer, not to mention the film to give this year’s biggest action flick “The Berlin File” a run for its money.

And whether it proves to be true or not, the lineup alone for “Cold Eyes” is enough to get tongues wagging. For starters, there’s Hallyu heartthrob Jung Woo-sung, best-loved actress Han Hyo-joo, much respected Sol Kyung-gu and even a famed idol singer: 2PM’s Junho.

But the film’s real significance lies in the fact that it marks a milestone in the careers of its cast members.

Co-directed by Jo Ui-seok and Kim Byung-seo, the film sees its stars scurry around every nook and cranny of Seoul and signals many firsts. It’s Jung’s first time playing a villain, Han’s first time starring in an action film and Junho’s film debut. 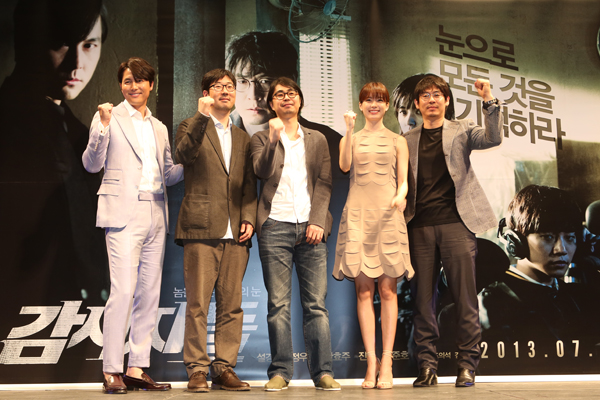 Jung was joined by directors Jo Ui-seok and Kim Byung-seo and co-stars Han Hyo-joo and Sol Kyung-gu at a press conference on Tuesday to promote the film.

With a month to go until opening day, Jung, Han, Sol and the filmmakers assembled on Tuesday to talk about the challenges that come with entering into new territory.

Jung got the ball rolling.

“While working on TV dramas for the last two years, I’d see my friends promoting their films and each time I had this desire to ‘come home,’?” he said. “And to make a movie that is set all over Seoul, it really felt like a homecoming, and I was only too glad to take part.”

When he first saw the script, Jung said he knew he wanted to play the villainous James right away, even if he wasn’t sure just how to go about it.

“The directors told me not to worry about my own brand of acting and instead just be true to the character,” Jung said.

“It’s a funny concept to classify a villain based on how bad he is, but I’m a professional burglar in the movie, and in some ways, it’s not as bad as someone who hurts people.”

He said he liked the “unique presence” of James as “a very low-key guy even when he’s tailed by the Surveillance Team.”

Jung also explained that he put his heart and soul into acting because he felt his portrayal of the character would have a big impact on the final result. This was in spite of the physical challenges of the role.

Filming took place in a number of business districts from Teheran-ro to Cheonggye Stream, Garosugil, Yeouido, Gwanghwamun and Itaewon in the middle of winter. “We’d section off busy roads where people walked on by and not one person complained, which is kind of rare,” said Jung who said that he felt the support of Seoulites fuelling him on.

A typical day on the set would see Jung jumping around atop a 30-story building and tackling foes underground, all at subzero temperatures.

But Jung said he was happy to do it.

“It must have been cold, but I never really felt it because I was so into it,” he said.

For co-star Han, who has made a name for herself in romantic comedies, the film was her chance to prove her versatility.

“I told her, keep practicing and you can make it in Hollywood,” said Sol, who was impressed by the actress.

Han said she found herself taking the role “very seriously” and reveled in putting her body to the test.

“Unfortunately there’s only one scene that required heavy action, and maybe it’s because of this that I put a lot more effort into it,” Han explained.

“I never knew I would be so into action, and I hope to star in more action films from now on.”

While Jung and Han discovered parts of themselves they never knew existed, Sol said he took part purely for the star factor.

“To be honest, I didn’t actually read the script before I signed,” said the 45-year-old. “How could I refuse? I think I made the right choice.”

While the actors looked within for guidance, filmmakers Jo and Kim had their hands full with bringing to life a film that weaves in and out of some of the city’s most congested districts.

“Filming in Seoul is a very tense situation in itself,” Kim said. “It’s an action film that tilts Seoul upside down. I’d like viewers to notice more than the tension and also take note of how the story builds.”