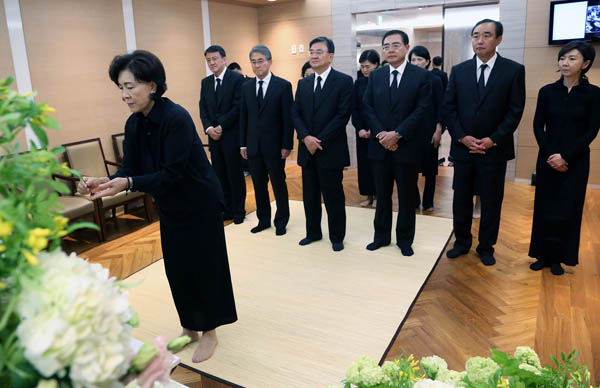 Hong Ra-hee, director general of Leeum, Samsung Museum of Art and the eldest daughter, burns incense before the mourning altar of her mother Kim Youn-nam yesterday, as Kim’s other children, including Hong Seok-hyun, chairman of the JoongAng Ilbo, third from left in the first row, pay their respects. By Kim Kyung-bin

Upon hearing of Kim’s death, a number of influential figures paid visits to the hospital to show their respects.

Kim was born in the coastal city of Mokpo, South Jeolla. While attending Ewha Womans University as a junior in 1943, she married Hong Jin-ki (1917-86), the former chairman of the JoongAng Ilbo and Tongyang Broadcasting Company, who at the time was working as a judge at the Jeonju District Court in Jeonju, North Jeolla. 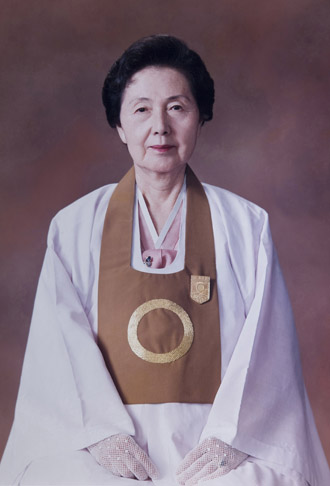 The two are survived by four sons and two daughters: Ra-hee, director general of Leeum, Samsung Museum of Art and the wife of Lee Kun-hee; Seok-hyun; Seok-joh, CEO of BGF Retail; Suk-joon, CEO of Bokwang Investment; Seok-kyu, CEO of Bokwang; and Ra-young, deputy director at Leeum. Kim was also the mother-in-law of Cholsoo Charles Lho, publisher of the Korea JoongAng Daily.

The late Hong - the husband of the deceased - was at the core of Korea’s tumultuous history in the 1950s and ’60s. He served as justice minister and home affairs minister under the Syngman Rhee government, the country’s first administration after its independence from Japan’s colonial rule (1910-45) on the Korean Peninsula.

He also took responsibility for the civilian casualties in the student uprising of April 19, 1960 as the then-home affairs minister and was imprisoned for three years.

The deceased lived through those difficult days with her religious faith. She became a follower of Won Buddhism in 1962 and practiced it devotedly ever since. This led the late Hong to also become a follower while he was imprisoned, and their six children followed suit in subsequent years.

An official with Won Buddhism told the JoongAng Ilbo that “She made great contributions in edification of Won Buddhism in America as well as increasing its influence there.”

Her efforts led to the opening of the Won Dharma Center in Claverack, New York, in 2011.

In recognition of such contributions, Won Buddhism endowed her with the dharma rank “The Status of Beyond The Household” in 1991, which is the highest dharma rank an average follower can get. When someone with the rank dies, he or she is described as a “Won Master [Wonjeongsa].”

A memorial for Kim Youn-nam, “Won Master,” is currently being held at the Samsung Medical Center.

The funeral ceremony will be held in the Won Buddhist tradition at 7:30 a.m. on Saturday.