Festival serves up a taste of Latin America

Festival serves up a taste of Latin America 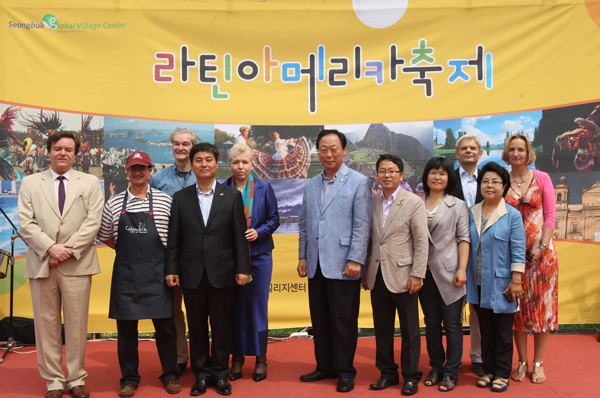 The festival introduced traditional delicacies, beer and wine from Mexico, Brazil and Peru, as well as Colombia and Chile, along with music performances featuring salsa dancing, the Celeste Tango and the pan flute, a Peruvian traditional instrument.

The proceeds from the sales of the food were donated to charity organizations.

“It’s important to share the traditions of different countries,” said Lebedeff of Brazil.

“I feel that Koreans are familiar with American culture. Its music, dramas and movies are well received here, but the Latin American culture is less recognized than the American one and often limited to very stereotyped images,” he said.

The festival now draws such a large number of locals and expats alike for one day but three years ago its beginning was modest.

“Seongbuk District is home to 9,000 foreign residents, as there are a lot of embassies located in this region. Thirty-nine embassies are here and many ambassadors and officers,” said Hans-Alexander Kneider, the German honorary head of the global village center dedicated to helping foreigners settle in the Seongbuk neighborhood.

Kneider, who also serves as a German language professor at Hankuk University of Foreign Studies, was at the helm of organizing the Latin festival.

“So, it’s quite natural for me to think of ways to share the diverse culture of different countries. But at the beginning it was less organized and attracted a smaller number of visitors,” he said.

“Having lived in Korea for more than 20 years, I know a lot of embassy officials and discussed ways to take the ideas into a real event,” he said, adding that a Christmas-themed event by European countries’ embassies is also held annually in early December.

“We try to deliver the essence of Latin American cultures encouraged by the support of locals and Latin American people,” said Kim Jin-dong, director of the Administrative Support Division at Seongbuk District Office.

“Our district official couldn’t expect the festival to take off and attract hoards of visitors. But now we do our best to meet their expectations,” he said.

The free event took place at the fountain square, where festivalgoers can enjoy music, various music performances, traditional food, activities for children, unique arts and handcrafts and much more to entertain the whole family. The square took the form of what Latin Americans call a “plaza,” where entertainment activities take place.

Kneider is poised to bring more diverse cultural aspects into Korea by holding additional events for the upcoming months.

“In this September, we are going to have an Islam-themed festival and next year, African.

“Dozens of African embassies already confirmed they will join us,” Kneider said.