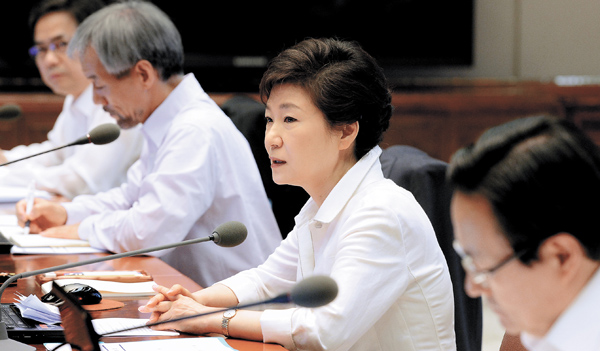 President Park Geun-hye, second from right, presides over a meeting yesterday in the Blue House to discuss strategy for the inter-Korean talks. [Joint Press Corps]


The Blue House made a last minute push to upgrade the talks between South and North Korea in Seoul tomorrow and Thursday.

“When the two Koreas sit down for a dialogue, each side must be represented by a respectable negotiator,” a senior presidential official told reporters on the condition of anonimity at the Blue House yesterday. “And that will be the starting point for mutual trust.”

In negotiations at the border truce village of Panmunjom from Sunday to Monday morning, the two Koreas agreed to have high-level government talks in Seoul this week. But North Korea resisted South Korea’s request for them to be ministerial-level.

Several details about the talks were still being negotiated by hotline, and the Blue House continued to put on pressure yesterday to try to get North Korea to send a minister.

“If the status of the counterparts are not reasonable, it will be hard to build trust,” the Blue House official said. “Matching the comparable level of the negotiators is something both sides must observe.”

The official went on to say it would be desirable for the North to respect an international standard in its choice of chief negotiator for inter-Korean talks.

“When the North sends someone to Washington and Beijing for talks, it uses an international standard,” he said. “If the North ignores it for the inter-Korean talks, that’s against mutual trust.”

While it was not decided as of yesterday whom the North will send as its chief negotiator, Seoul officials and North Korea experts expressed hopes it would be Kim Yang-gon, director of the United Front Department of the North’s ruling Workers’ Party.

Kim, who has been in charge of South Korea affairs since 2007, is considered as an influential figure with sizeable authority in the North.

President Park Geun-hye yesterday hosted a meeting with her security aides to discuss her government’s strategy for the inter-Korean talks that will begin tomorrow.

According to Lee Jung-hyun, Park’s senior public relations secretary, the main topic of the meeting was the upcoming talks but last week’s China-U.S. summit was also discussed as well as Park’s visit to China later this month. Over the weekend in California, U.S. President Barack Obama and Chinese President Xi Jinping agreed they wouldn’t recognize North Korea as a nuclear-armed state and will not accept its nuclear arms development.

“They discussed efforts to establish sustainable peace on the peninsula,” Lee said. “They also discussed the importance of creating a new and constructive inter-Korean relationship and implementing the Korea Peninsula trust process.”

Earlier in the morning, Park made a brief mention of the progress in inter-Korean dialogue.

“North Korea accepted last week our offer for a dialogue between the two governments, and the working-level talks took place in Panmunjom [Sunday],” Park said as she hosted a senior secretariat meeting earlier in the morning. “I hope the inter-Korean talks will move forward constructively in the future.”