Legendary guitarist goes back to his analog roots

Legendary guitarist goes back to his analog roots 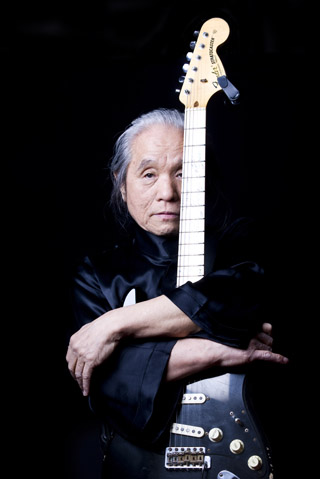 Korean legendary rock guitarist and singer-songwriter Shin Jung-hyeon, 75, was once a front-runner of digital sound. He is the first Korean musician who made a track “inhyeong” (meaning doll in Korean) in the 80s using a computer program. His studio album that came out in 1994 was made entirely with computer programs, from recording to mixing. Shin spent much of his time and career achieving a higher level of digital sound.

His studio is even fully equipped with machinery to produce online lectures, with the hope of making video lectures in order to share his compositions through his Web site.

Shin’s tireless efforts in improving sound paid off when he became the first Asian musician and the sixth in the world to receive a Fender Custom Shop Tribute Series guitar, joining other five rock legends, including Eric Clapton and Jeff Beck.

After Shin was awarded the guitar from Fender, some of his albums came out as LPs in the United States and some tracks were featured in the sixth season of the drama series “Californication” and “The Double” (2013).

But Shin eventually came back to where he started: analog sound.

During a recent visit to his studio, located in Yongin, Gyeonggi, reel tape recorders made by Studer and Revox replaced digital music equipment.

“After years of my research on sound, my conclusion is going back to analog. That is because analog sound only can capture all sounds human makes,” said Shin.

“It is a digital era but people turn to analog sound. They listen to music with LP records and vacuum tube amplifiers. If you are accustomed to MP3 music, you can’t judge music.

“But I can deliver the sound I make without any distortion with LP. That is real music,” added Shin.

Then what makes Shin get back to square one? “I’ve done everything I could with digital equipment but there was a limit. Since digital technology makes music with 0s and 1s, many notes are omitted. Sound becomes clear but it has no soul inside it.”

In order to record his music in analog, Shin decided to record with reel tapes and release albums on LPs.

“I don’t think I have shown the real musical side of me to the public yet. I’ll compose songs. People often say life restarts at 70.

“It will take some time for me but I plan to record a new song in one take. I believe it is a way to present real music. If I edit or modify the song [with digital music makers], it is not real,” continued Shin.

Early albums of Shin’s were produced in one take. For example, a guitar solo album released in 1958 was recorded just once. Shin and his band mates surrounded a microphone and played, which is quite different from today’s way of recording. Under digital technology, producers pick the best part and edit by recording the same song numerous times.

“If more and more people are willing to listen to real music that is close to the original sound, these people also create job opportunities,” Shin said. “An LP factory has opened recently. And more experts could get back to work. Music is not mere entertainment. It is time to think about value of music.”