Economic democratization at a crossroads

Economic democratization at a crossroads 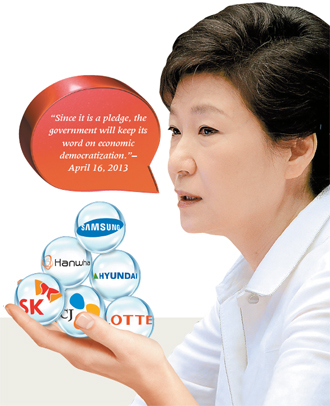 “Since it is a pledge, the government will keep its word on economic democratization.” ; April 16, 2013

The clock is ticking as the government tries to cement its “economic democratization” initiative, one of the flagship policies of President Park Geun-hye, by pushing legislation through a special session of the National Assembly currently under way. Meanwhile, the business community?is up in arms, claiming that although there is a need for democratization, excessive restrictions and government-enforced policies would likely deter expansion and be a drag on growth.

Furthermore, there are growing concerns about whether Park has a clear set of goals regarding the initiative after some found recent comments from her to be contradictory.

A total of 12 bills related to economic democratization are scheduled to be passed by the National Assembly by early next month at the latest.

Yesterday, opposition lawmakers told the government to come up with policy specifics for economic democratization.?Not much time is left for the government?to lay the legislative groundwork for its centerpiece initiative, since the National Assembly has scheduled general assemblies?for June 25 and 27. If not?passed by then, bills would be discussed again on July 1 and 2.

However, some confusion began to to emerge after some of Park’s recent remarks.

“I am worried about excess legislation on economic democratization,” she said at a meeting April 15. “Pressuring businesses is not the point of the initiative.”

That seemed to go against what she said during last year’s campaign. “The first task of a happy era for the people is to realize economic democratization that makes small firms dream again,” Park said last July.?

Criticism was leveled at the president, especially by lawmakers who believed Park seemed lost in her own economic democratization idea.

“Since it is a pledge, the government will keep its word on economic democratization,” the president said April 16.??

The business community is raising its voice against the government’s and politicians’ move toward economic democratization, saying the initiative hinders establishment of a creative economy, another key policy of Park.??

The Korean Chamber of Commerce and Industry unveiled a survey yesterday revealing that 45 percent of 302 large and small companies said the discussion on economic democratization bills at the National Assembly has gone too far.

“Economic democratization is needed in some parts, but the current level of discussion at the National Assembly has overreached,” the survey said.

The survey also indicated that prohibiting new cross-shareholding investments would hinder speedy and efficient decision-making by top management, cited by 42 percent of respondents.

Companies want the government to work on measures to enhance the competitiveness of small enterprises rather than writing additional regulations for large companies, the survey showed.

“The economic democratization bills should be handled with a careful approach in a way that minimizes adverse effects on the economy,” said Jeon Su-bong, a KCCI executive director.??

The Federation of Korean Industries, the country’s largest business lobby, has been releasing a series of data and reports to support is contention that the economic democratization initiative would suffocate companies further in the midst of adverse conditions.??

In the most recent report, the FKI said the number of regulations on businesses is rising sharply, making it harder for companies to operate. The report said a total of 14,796 rules existed as of May and more than 800 of them were added this year alone.

“By the end of this year, there will be about 15 percent more rules if the current trend continues,” the report said.

It also said the growth of regulations would be higher than that of any past government.

In each year of the Lee Myung-bak administration, business regulations grew 5 percent to 9 percent, the report showed. Regulations increased by just 1 percent annually during the Roh Moo-hyun administration. They decreased under Kim Dae-jung.

“With enactment of the economic democratization bills, the number of regulations on businesses is expected to continue rising, aggravating companies’ worries,” said an FKI official.

Earlier this month, the FKI released a report saying there could be an “exodus” of Korean businesses to other countries due to the worsening business environment at home.

Heads of the country’s five business organizations, including the FKI, KCCI and Korea Employers Federation, met Monday to discuss taking action against the multiplying rules and regulations.

“The rising number of rules will undermine the nation’s competitiveness as a whole,” heads of the organizations said in a joint statement.

Regarding the lawmakers’ move to ban internal transactions among subsidiaries, the business community says it would dilute one of the strengths of Korean conglomerates whose subsidiaries share materials and parts supplies, production of finished products and logistics services in order to increase the efficiency and productivity of the group.

“The five bodies that hastily hide unfair trade practices, labor suppression and greed of chaebols deserve criticism. The FKI should be disassembled,” said a confederation of 16 civil groups, including People’s Solidary for Participatory Democracy, at a press conference last month.

“The business community is threatening the general public by blindly saying companies will slash investment and employment if the economic democratization legislations are passed, even though some of them are aimed at improving the people’s rights to job security and safety,” said Ahn Jin-geol, secretary-general of the confederation.

Kim Jong-in, known as an economy mentor of President Park, pushes for early implementation of the initiative, while others say the government needs to slow down in the current economic climate.

“June will be a watershed moment for the government to resolve the whole economic democratization issue,” said Kim Sang-jo, director of the Solidarity for Economic Reform at the National Assembly Economic Democratization Forum earlier this month.?