Gov’t turns up the heat on electricity wasters

Gov’t turns up the heat on electricity wasters 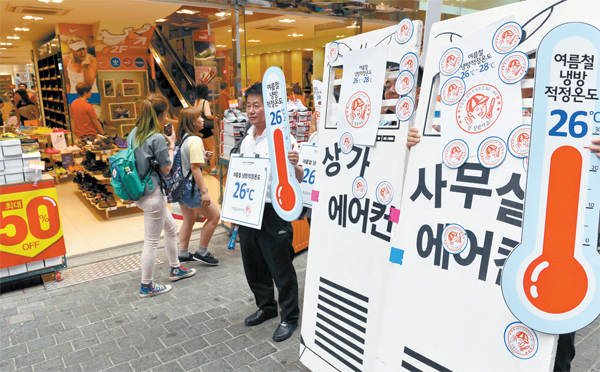 Members of Korea NGO’s Energy Network participate in a campaign to urge merchants and businesses to keep the lowest temperature at 26 degrees Celsius (78.8 degrees Fahrenheit) from today through Aug. 30 in a bid to prevent a possible power outage this summer in Myeongdong, central Seoul, yesterday. [NEWSIS]

Starting today, the government will crack down on stores that leave their doors open with air conditioners on, and from July 1 buildings keeping the temperature lower than 26 degrees Celsius (78.8 Fahrenheit) will face fines of up to 3 million won ($2,658).

The Ministry of Trade, Industry and Energy yesterday announced regulations for business energy use to help prevent power shortages during the upcoming peak summer season. The situation is especially acute this year due to the unplanned shutdown of two nuclear power plants and the delayed opening of two others because of substandard parts with fabricated quality certificates.

The ministry said the regulations will be in effect from today through Aug. 30.

Shops operating with their doors wide open in Myeongdong, central Seoul, and in the Gangnam Station area, southern Seoul, will be major targets.

During the peak time between 2 p.m. and 5 p.m., 476 buildings designated by the government as power guzzlers will have to turn off air conditioners for 30 minutes, staggered by region. The buildings include hotels, department stores, large supermarkets, banks, and convention and arts centers. If all branches of a department store in Seoul turn off air conditioners from 2 p.m. to 2:30 p.m., branches in Gyeonggi would do so from 2:30 p.m. to 3 p.m.

Public institutions also have to abide by the rules.

While the ministry will start to clamp down on energy use at buildings today, penalties will be imposed from next month.

If Korea Power Exchange issues a level three warning for an outage - when electricity reserves drop below 3 million kilowatts - public buildings must turn off all air conditioners.

Schools, airports, public transportation and hospitals are exempt from the regulations.

With the arrival of the rainy season through mid-July, the nation’s power authority is on high alert.