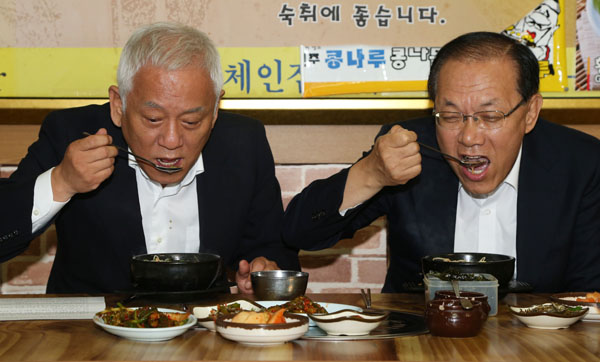 Democratic Party Chairman Kim Han-gill, left, and Saenuri Chairman Hwang Woo-yea, right, have breakfast together yesterday morning at a restaurant in Yeouido, western Seoul. It was their first meeting since Kim’s election as the new head of the main opposition party. [NEWSIS]

The new leader of the Democratic Party yesterday said they will be forced to end their cooperation with the ruling party if demands for a National Assembly probe into the intelligence agency and police’s alleged interference in the presidential election are not accepted.

Kim, however, responded to Hwang’s greeting with pointed remarks. “I was reluctant to come to this meeting,” Kim said, “because the National Assembly probe into the alleged presidential election interference by state authorities, such as the National Intelligence Service, did not proceed as agreed.”

Kim said the Saenuri Party’s failure to keep its promise will weaken trust between the two parties and issued an ultimatum to his counterpart.

“If the National Assembly probe does not take place as the ruling and opposition parties agreed, the Democratic Party has no choice but to end the “honeymoon” of cooperative relationship with the ruling party at the beginning of the Park Geun-hye administration,” Kim said. “And I want to stress this to Hwang today.”

The prosecution last week indicted Won Sei-hoon, who headed the National Intelligence Service at the time of the Dec. 19 presidential election, on charges of violating the election law and failing to maintain political neutrality.

Under Won’s leadership, the spy agency was suspected of conducting an online smear campaign against opposition candidate Moon Jae-in.

Kim Yong-pan, who headed the Seoul Metropolitan Police Agency, was also indicted on charges of election law violation and abuse of power.

The Seoul police announced their initial probe outcome three days before the election, clearing an NIS agent of the charge, and Park won the election. The police later reversed their conclusion in January.

In March, the ruling and opposition parties agreed to conduct a National Assembly investigation into the scandal, but no progress was made for a probe.

Amid the deepening political dogfight, the Democratic Party made an accusation Monday that Kwon Young-se, Korea’s ambassador to China who worked as a senior manager of Park’s presidential campaign, was behind the scandal. Kwon denied the accusation while the Saenuri Party condemned the DP for trying to undermine the Park administration by politicizing the scandal.

According to the spokesmen of the two chairmen, Hwang replied yesterday that the ruling party will have an internal discussion on the matter to decide its position.

DP spokesman Representative Kim Kwan-young said yesterday that the two leaders agreed on some things, despite their differences over the probe. “The two leaders agreed that the bills linked to end lawmakers’ privileges will be approved first during the June extraordinary session,” Kim said.

“The two leaders also agreed to do their best to approve bills to realize common presidential pledges and bills linked to economic democratization during the June session,” Kim said.

“To improve the system of party think tanks, heads of the two parties’ policy institutes will meet soon for a discussion.”

At the Special Committee on Political Reform meeting yesterday, lawmakers deliberated measures to root out violence from the legislature and regain public trust.

According to the plan, a lawmaker convicted of using violence to obstruct National Assembly operations and who has been fined more than 5 million won ($4,423), will be prevented from re-election for the next five to 10 years.

The measures still need to be approved at the plenary session after going through relevant standing committees, and that prospect is high since the heads of the ruling and opposition parties agreed to the passage.