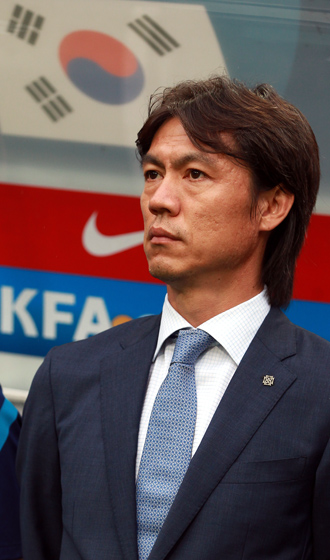 Hong Myung-bo, who managed Korea to win its first-ever Olympic medal in London last year, is the leading candidate to take the helm of the Korean national team at the 2014 Brazil World Cup.

The Korea Football Association held a press conference at its headquarters in central Seoul yesterday and announced a four-member shortlist of the candidates to replace Choi Kang-hee, who stepped down after securing Korea a World Cup slot with a 1-0 loss to Iran on Tuesday night.

The KFA said it shortlisted the candidates in a two-hour technical committee meeting before the press conference. The vice presidents will pick one of the four and get approval for the decision from KFA president Chung Mong-gyu. The final choice will be announced within a week, it said.

Huh Jung-moo, a KFA vice president who presided over the press conference with KFA technical committee chairman Hwangbo Kwan, admitted that Hong is the leading candidate, but declined to name the other three.

“We are very positive [about having him as the coach],” Huh said, referring to the 44-year-old former star defender, who captained the semifinalists of the 2002 Korea-Japan World Cup.

“He played at four World Cups and earned good results,” Huh said. “He also participated as an assistant coach. At the last Olympics, he had a good result as a coach.”

Hong, who served as an assistant to Dick Advocaat during the 2006 Germany World Cup, led the young Taegeuk Warriors to clinch a bronze medal at the London Olympics.

Huh said that a majority of the players who will play in Brazil have experiences with Hong either as a teammate or a coach, which means they wouldn’t need much time to adjust to him if he is hired.

Hong is taking a break in the United States after training in Russia through last month. He attended a coaching training session with the Russian club Anzhi Makhachkala, which is led by his former mentor, Guus Hiddink.

Kim Ho-gon, Ulsan Hyundai’s coach, is rumored to be on the shortlist. Kim, 62, managed Ulsan to the Asian Football Confederation Champions League last year and also led the Korean national team to the quarterfinal of the 2004 Olympics.

The KFA revealed that it is also open to hiring a foreign coach, preferably one who has experience in the Round of 16 or further stages of the World Cup as a manager. Senol Gunes, a Turk who served as FC Seoul coach between 2007 and 2009, is reported to be one of them. Gunes, 61, led Turkey to third place during the Korea-Japan World Cup.

According to a recent Ilgan Sports survey on 100 coaches, administrative officials or former players, 33 of them recommended Hong as the most suitable coach to lead the Korean national team, while 12 recommended Gunes. Twenty-two others didn’t name a specific person but said Korea should hire a foreign coach in order to select the players based only on their talents, which Hiddink did successfully en route to the semifinals during the Korea-Japan World Cup.