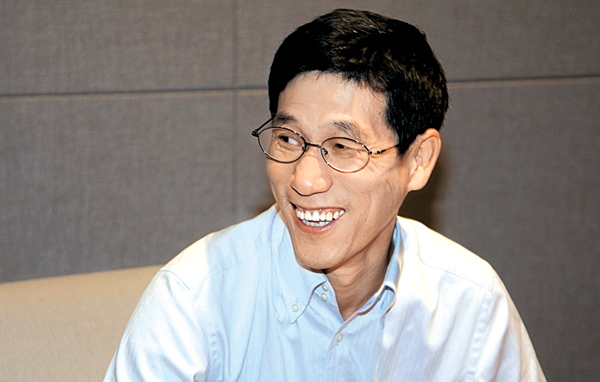 Many are watching to see how the known liberal will reveal his opinions on the program, which started featuring him last week.

“I understand that I’m meant to criticize without siding with anyone,” Chin said after being introduced by host Im Baek-cheon.

He said he decided to join the show as the channel pursues constructive dialogue regardless of political views. He also shared his opinion on other current affairs programs.

“Some take [those programs] as war,” he explained. “Some of the cable channels [that talk about current affairs] have hit rock bottom as they push the argument ‘my team is always right.’ That means they don’t reach any solutions.”

Many of the programs focus more on analysis of facts rather than the facts themselves, he continued, saying that each party in an argument has a big picture idea of the debate but lacks details to support arguments.

Instead, these programs should focus on helping others understand important news events rather than persuading them to accept a certain viewpoint, Chin said.

“As different opinions collide fiercely like flames, each party will get to embrace the opinions of the opponent,” he said.

The professor also noted that being active on social networking services is his attempt to bring attention to important social issues. Given his harsh opinions, Chin said he has been sure to invite supporters and opponents to the online dialogue.

“I get blamed often, and there is only one comment for every 100 that is really worth reading,” he said. “The real criticism is what makes you feel horrible by convincing you that it’s true.”

Contrary to his reputation for being full of spiteful remarks, Chin argued that he is an introvert.

“There are fewer than five people that talk to me on the phone,” he said. “However, due to my public image, I’m sometimes mistaken as a cruel person.”

He added that he is more of a writer than a talker.

“I want to write something that makes me think that I could die because I finished writing that book,” he said.

The weekly JTBC program airs every Thursday and focuses on a variety of issues across politics, economy and culture.

Producer Lee Young-bae pledged that he will do his best to bring out the most interesting elements of Chin’s remarks as they fit in with his own style.