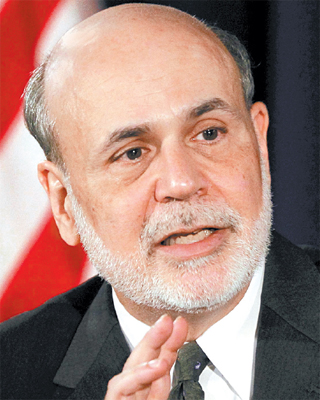 Fear of an end to the U.S. Federal Reserve’s quantitative easing program rattled markets across the globe yesterday, and Seoul was no exception.

The Korean won weakened to its lowest level against the dollar in almost 11 months to close at 1,145.7 won, down 1.32 percent. The benchmark Kospi dipped 2 percent to close at 1,850.49, its lowest closing since Aug. 3, 2012. The jarring drops came after Fed Chairman Ben S. Bernanke told reporters Wednesday that the Fed may start scaling back its quantitative easing program of $85 billion monthly bond buying later this year and end it by the middle of next year.

“If the incoming data are broadly consistent with this forecast, the committee currently anticipates that it would be appropriate to moderate the monthly pace of purchases later this year,” Bernanke said, referring to the Federal Open Market Committee’s outlook for labor-market gains, moderate economic growth and an inflation rate reaching the Fed’s 2 percent goal.

If such gains are maintained, he said the Fed “would continue to reduce the pace of purchases in measured steps through the first half of next year, ending purchases around mid-year.”

Bernanke added that a “strong majority” of the Fed officials now believe the central bank won’t sell mortgage-backed securities as part of their exit policy.

Shock wave in the market

The U.S. central bank initiated its third round of quantitative easing measures (QE3) in September by buying $40 billion a month of mortgage-backed securities and it added $45 billion of Treasury purchases in December.

In September, the FOMC said it will continue buying bonds until it sees signs of substantial improvement in the labor market.

“It is abnormal that the Kospi fell below the 1,850 mark [during trading hours] given that there’s no problem with the market economy,” said Kim Hyeong-ryeol, an investment strategist at Kyobo Securities. “Investors need to take Bernanke’s remarks positively as discussing a possible exit strategy means U.S. economic indicators have improved. Investors who benefited from the effect of U.S. stimulus measures are unhappy with the improvement of economic indicators. They need some time to accept the signs of economic recovery positively.”

Other analysts worried that investors jittery about the Fed’s moderating its bond purchases could negatively impact the Korean market for the time being.

“The dollar’s appreciation triggered by the Fed’s winding back its huge economic stimulus program is highly likely to negatively affect emerging markets,” said Park Sang-hyun, an analyst at Hi Investment and Securities. “The Fed’s decision is likely to intensify emerging markets’ triple weakness in stocks, bonds and currency markets.”

Emerging bond markets including Asia’s, which benefited from the U.S.’s quantitative easing program, will see interest rates go up and have their currencies depreciate.

Kim of Kyobo suggested the won could weaken further to 1,185 won given that the local currency depreciated to that level in May of last year.

While the market responded sensitively to Bernanke’s remarks on Wednesday, the focus is now on what Korean financial authorities can do to minimize the negative impact on the local economy.

“We [the Korean government] have calculated all possible scenarios and will take measures based on how things go,” said an official from the