Problems many, solutions few for builders

Problems many, solutions few for builders 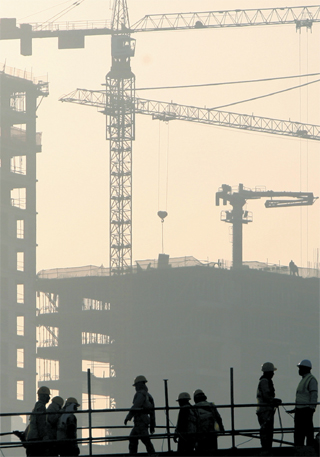 In this 2009 file photo, work gets under way at a construction site in Dubai. Local builders have been expanding overseas in recent years in search of new revenue sources. However, some overseas projects have not fulfilled expectations. [AP/NEWSIS]

On Tuesday, leading industry figures gathered at Construction Hall in Nonhyun-dong, southern Seoul, to celebrate the 23rd Construction Day. While the government and Federation of Construction Associations recognized 157 people for their contributions to the country, the occasion was subdued.

“The reality of the construction industry is so dark that we just can’t celebrate this day,” said Choi Sam-kyu, chairman of the FCA. “The business environment has been difficult for the past five years since the 2008 global financial crisis, and the forecast for the future doesn’t look bright.”

On the same day, members of the Korean Federation of Construction Company Unions protested in front of the Seoul government complex in Gwanghwamun, central Seoul, demanding help for the industry and its workers. The Korean Construction Workers Union plans to go on strike next week for higher wages and improved benefits.

According to the latest data, the construction industry still plays an important role in the economy, accounting for 15 percent of GDP and 7 percent of employment. But experts say the Korean construction industry may be in serious danger. While builders have suffered from a stagnant housing market at home, recent news showed they also are being battered overseas.

Worse, there seems to be no plan for turning things around.

How bad is it?

Land Minister Suh Seoung-hwan, right, and FCA Chairman Choi Sam-kyu, second from right, to throw paper airplanes on Construction Day, perhaps as a distraction from the turbulence the indusrty faces. Provided by the FCA

Almost all data released this year points out that the situation is not just bad, but a threat to the very survival of construction companies.

According to data released by the Construction Association of Korea (CAK) last week, 55 of 111 construction companies listed in the stock market couldn’t pay even the interest on their bank loans in this first quarter.

The association said that average interest coverage ratio of Korean builders have marked only 64.8 percent in the January-March period, a 184.3 percentage point plunge from a year ago. A ratio below 100 percent means that interest payments cannot be covered by operating profit. Total interest costs for builders in this first quarter increased by more than 10 percent year-on-year, surpassing 1 trillion won ($883 million).

These companies’ average ratio of operating profit to sales has also dropped dramatically to 1.4 percent in this first quarter, from 4.7 percent a year ago.

“Considering that local builders are going through debt workout programs or court receivership, the actual business sentiment of the construction industry is worse than what is reflected by the data alone,” said a CAK official. “It’s a crucial time that requires a strong commitment by the government to rescue the industry, because if this situation continues, not many companies will survive.”

As of last month, 21 companies were either going through debt workout programs or court receivership. And according to a report by the Korea Deposit Insurance Corporation last week, an additional 15 builders with total loans of more than 9 trillion won are at risk to enter a financial restructuring program this year.

To generate cash, builders like Daewoo E&C, GS E&C and Doosan E&C recently sold their headquarters’ buildings in Seoul, while other companies have sought new revenue streams from such unrelated businesses as drinking water and cosmetics. Some have recently replaced their CEOs.

According to the CAK data, the value of domestic orders secured by builders in the first quarter was 16.5 trillion won, down 31.1 percent from a year ago. Shrinkage of private construction projects was a major factor, crumbling 45.5 percent year-on-year to 9.9 trillion won.

Last year, builders secured 101.5 trillion won in domestic orders, the lowest value since 2005. Industry insiders fear the next few years could be even worse, possibly falling under the 100 trillion won considered to be the minimum needed to sustain existing companies.

So far, the public sector has been a vital source of new business, but recently the government decided to cut social overhead capital (SOC) expenditures over the next four years and use that money to fund its social welfare initiatives.

The Ministry of Strategy and Finance last month announced the Park Geun-hye administration’s “account book” for carrying out Park’s election pledges. Under the 134.8 trillion won budget plan, the government will cut 11.6 trillion won from the SOC budget starting next year. Considering a 9.5 trillion won budget cut for housing, the actual damage to the construction industry will be in the neighborhood of 21.1 trillion won.

This is far from what builders experienced the past five years. During the Lee Myung-bak administration, builders were able to keep up their business as the government pursued the Four Major Rivers Restoration Project. The SOC budget during this period was 25 trillion won annually, but under the Park administration the annual SOC budget will be 20 trillion to 23 trillion won.

To fill the void, the government said it will seek to partner with private companies on construction projects, including infrastructure. Industry observers are skeptical because private investors are mostly concerned with profits.

“The government should escape from the dichotomy of thinking that welfare and SOC investment are separate,” said Joo Seung-yong, a Democratic Party lawmaker who heads the National Assembly’s Land, Infrastructure and Transport Committee. “SOC can create jobs, upgrade transportation and enhance people’s safety and right to live.”

Many experts suggest that the culprit in the construction industry’s slump is unsold apartments, 70,201 of them as of April.

The land ministry came up with a real estate stimulus package on April 1 that waives capital gains taxes on apartments worth up to 600 million won that are 85 square meters (914.9 square feet) or less and sold within five years. It also gave an acquisition tax exemption to first-time homebuyers and eased regulations on apartment remodeling.

The number of home transactions across the nation increased 7.5 percent in April and 32.5 percent in May compared to a year ago, according to ministry data. Last month there were 90.136 sales, the second most since May 2008.

But industry insiders have urged additional measures in anticipation of a “transaction cliff” when the temporary acquisition tax cut, which was introduced during the Lee Myung-bak administration, ends this month.

However, Land Minister Suh Seoung-hwan recently said the ministry does not want an extension, and instead will push bills that would eliminate the cap on apartment prices and increase the capital gains tax for owners of multiple properties.

To move the inventory unsold apartments, builders are offering discounts and even “pre-living” programs, which allow potential buyers to live in their homes for two years before deciding whether to buy.

Beleaguered on the domestic front, builders have been looking overseas, but that strategy has turned out to be no guarantee of profitability.

GS said it lost money on the Ruwais refinery plant project in the United Arab Emirates, while Samsung Engineering said it lost 300 billion won in the United States and Saudi Arabia. That “earning shock” causes a month-long drop in construction stocks.

Experts trace the profitability problem to fierce competition among local companies bidding for foreign contracts. According to a report by IM Investment Securities, the value of overseas projects won by Korea’s top six builders won at a “poor price” in the Middle East for 2009-11 was 37.3 trillion won. The security firm speculated that the performances of these companies may not be pretty in the future as the losses will start to show up on their financial statements.

Industry sources say that since most construction projects are done on a turn-key basis, overseas engineering, procurement, construction and cost management is important, adding that some companies were too focused on winning orders. Losses from foreign projects mostly occur because of higher costs for materials and design changes.

“For their first projects in foreign countries, most companies have been aggressive to win orders even if they know it will not make much money,” said an official at a major construction firm. “They know once they win the first order, they will gain reputation and that will lead to other projects in that country.”

Some experts suggest that local builders really need to focus on their forte and diversify their overseas business to areas other than the Middle East, where competition is fierce.

And with the weak yen, some people say Japanese builders represent yet another threat to Korean construction companies.

“Japanese builders have seen Korean companies aggressively expand overseas,” said Lee Hong-il, a researcher at Construction Economy Research Institute of Korea. “Japanese and Korean builders have strengths in different areas, but as the yen gets weaker, it is true local builders will be less price competitive as they try to secure orders.”

Time to bounce back

This month, the Fair Trade Commission fined eight companies for their collusion in the bidding process for the Four Major Rivers Restoration Project. Last month, prosecutors raided 30 construction companies and investigated their executives.

In a separate case, some small and midsize builders’ firms were investigated by prosecutors in connection with a bribery case involving former National Intelligence Service Chief Won Sei-hoon.

“The construction industry these days has fallen to the ground, both in its business and reputation,” an official from CAK said. “At this moment, there seems to be no effective rescue measures other than to do their best at their own businesses.”

Experts point out that Korean builders need to emphasize their expertise in construction technology, play fair when securing overseas projects and fostering talent.

“Instead of just winning orders, we need to focus and concentrate, prioritize stability and profitability, implement risk management and find new growth engines,” said FCA Chairman Choi Sam-kyu. “We also need to transform our ethics, as various surveys show that clean and ethical companies have longer lives and higher potential.”