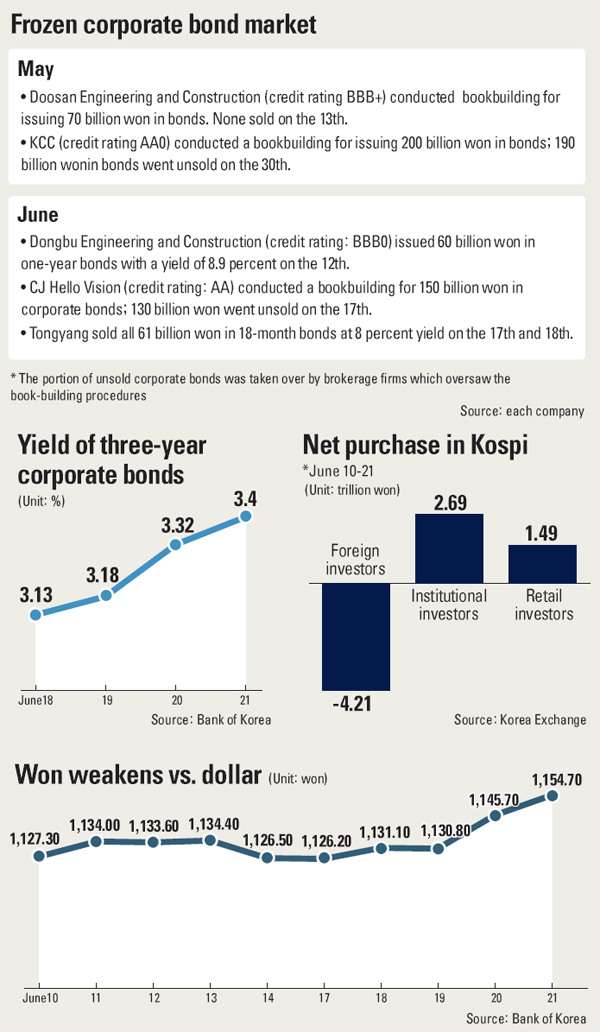 U.S. Federal Reserve Chairman Ben Bernanke’s forecast that the Fed may begin to taper quantitative easing later this year has dealt a severe blow not only to the local bourse and currency market, but also the corporate bond market.

The yield on three-year government bonds closed at 3.04 percent yesterday, up 0.1 basis point to surpass 3 percent for the first time in 11 months.

The yield on three-year corporate bonds closed at 3.4 percent, up 0.08 percentage point compared to the previous day.

The benchmark Kospi fell 1.49 percent to close at 1,822.8 and the Korean won weakened to its lowest level against the dollar in 12 months, 1,154.7 won, as foreign investors dumped a large amount of Korean shares.

“Investors feel increasingly insecure about the latest developments in the global financial market with Bernanke’s remarks, and this has led interest rates to go up and currencies to depreciate,” said Park Jong-yeon, an analyst at Woori Investment and Securities. “The local market will stabilize when either investors eventually find out they’re overreacting or U.S. government bond interest rates, which are also surging, stabilize.”

The jarring drops came after Bernanke said Wednesday that the Fed may start scaling back its quantitative easing program of $85 billion monthly bond buying later this year and end it by the middle of next year.

When adding the June 7 figure of 928.1 billion won, foreign investors have dumped more than 5 trillion won in past two weeks.

Yesterday, employees in charge of bond issuance at local brokerage firms were flooded with calls from employees at companies’ finance departments about whether they should hasten the issuance of corporate bonds.

“Companies have been doing what they can to delay issuing corporate bonds until the market rate, which has continued its upward trend, falls,” said an industry insider. “But the Bernanke shock has ended their wait and they’re now insisting underwriters issue bonds quickly before yields of corporate bonds go up further.”

Companies use securities firms as underwriters to issue corporate bonds.

Selected underwriters conduct book-building, a process in which an underwriter determines demand and estimates the price for future bond sales by accepting orders from investors who indicate the number of bonds they want and what they’re willing to pay.

“Everyone was panicking when the market opened on Thursday and Friday,” said an industry insider. “Interest rates surged sharply, but no investors dared to purchase corporate bonds.”

Market observers said when the Fed tapers the stimulus, it will have a negative impact on Korea’s corporate bond market, in addition to currency and stock markets. Companies will find it difficult to raise funds if the corporate bond market deteriorates further. Companies usually issue new bonds to repay maturing bonds. If companies cannot issue new bonds, they may face a liquidity crunch. This could cause companies’ credit ratings to fall and make it even more difficult to issue corporate bonds.

According to the Korea Financial Investment Association, companies have issued a combined 481 billion won in corporate bonds June 17-21, only a fifth of the 2.17 trillion won issued April 8-12. Companies, even healthy ones, are reluctant to issue corporate bonds as they know they will be hard to sell.

CJ Hello Vision, which received a credit rating of AA-, issued 150 billion won in corporate bonds on Tuesday, but only 20 billion of 150 billion won were sold, with the unsold bonds taken over by brokerage firms that oversaw book-building.

CJ Group has subsequently suspended its plan to issue corporate bonds for CJ Korea Express, CJ O Shopping and other affiliates. Other conglomerates are reviewing whether they need to issue bonds.

Market observers says cash-short companies with credit ratings of A+ and lower are the biggest losers in the frozen bond market. Some are issuing short-term, high-yield bonds to stay afloat.

Last week, Dongbu Engineering and Construction (credit rating: BBB0) issued 60 billion won in one-year bonds. Its desirable yield was between 8.5 percent and 8.9 percent and the yield was eventually set to 8.9 percent.

Shipbuilding, shipping and construction companies are hit hardest. Three-yield corporate bonds issued by shipping companies have surged to 9 percent this month from the 5 percent range in May.

“There will be almost no demand if shipping companies and shipbuilders issue bonds,” said Kim Eun-ki, an analyst at Hanwha Investment and Securities.

Some cash-strapped construction companies have turned to issuing commercial paper instead, even though the maturity period is much shorter and interest rates much higher.

“Issuing a large sum of commercial paper indicates companies are in a dire situation and it’s difficult for them to issue corporate bonds,” said a construction company executive.

“If the corporate bond market worsens, this will cause even Korea’s top 30 builders to go out of business,” said Kim Dong-soo, an official at the Korea Housing Association.

“Construction, shipping and shipbuilding industries are in a difficult situation, but companies engaged in these sectors have competitive power,” said Shin Dong-joon, an analyst at Dongbu Securities. “The government needs to unveil corporate restructuring guidelines at the soonest to prevent these companies from going out of business.”