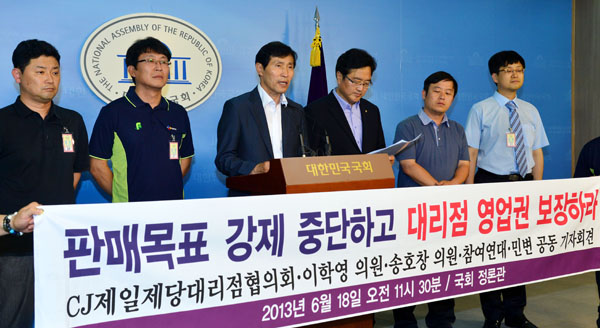 Distributors of CJ CheilJedang and the People’s Solidarity for Participatory Democracy hold a press conference at the National Assembly on Tuesday accusing the company of unfairly forcing hundreds of distributors out of business. [NEWSIS]

Following the recent controversy over Namyang Dairy Products’ abusive sales tactics with its distributors, CJ CheilJedang, the nation’s largest food and feed manufacturer, has been under fire for similar practices.

People’s Solidarity for Participatory Democracy (PSPD) said earlier this week that CJ CheilJedang has unfairly forced hundreds of small distributors out of business and it has notified the Fair Trade Commission.

The PSPD and council of CJ CheilJedang’s distributors held a joint press conference Tuesday at the National Assembly attended by Lee Hak-young of the Democratic Party, independent lawmaker Song Ho-chang and representatives of Lawyers for a Democratic Society.

CJ CheilJedang distributors said headquarters set unrealistic sales goals and discriminated against distributors that did not achieve them by reducing the supply of top-selling products or imposing financial penalties.

There are 600 CJ CheilJedang distributors nationwide.

According to the distributors council, about 100 million won ($86,419) worth of products at each distributor must be disposed of every year, causing millions of won in losses annually.

“Although CJ CheilJedang might say these cases are problems of only some distributor that mismanaged the businesses, the entire situation is structured in a way that distributors cannot help but constantly see deficits,” said the PSPD. “Even a distributor with excellent operating profits, which has won sales awards from headquarters for three consecutive years, is suffering from a 70 million won deficit due to excessive sales targets and inventory losses.”

According to the PSPD, one distributor whose house is already up for auction along with the growing debt from his business is waging a one-man protest in front of CJ CheilJedang’s headquarters.

“Headquarters also steals our hard-earned customers such as large discount store chains, super supermarkets (SSMs) and small independent retailers to directly trade with. Rather than protecting our business rights, they kill distributors in order to make a profit,” said a member of the council at the conference.

The PSPD warned CJ CheilJedang that distributors will go bankrupt one by one if the current situation continues.

“It has been looking for new victims to replace the collapsed distributors,” said a PSPD official.

In addition, the distributors council reported the company plans to expand the number of retail stores it deals directly with.

The council of distributors asked the company to stop doing business directly with retailers, protect the business rights of its distributors, bargain collectively with the council, eradicate sales targets and increase compensation.

CJ CheilJedang denied distributors’ claims, saying they don’t jibe with the facts, and that it will await the results of the FTC investigation.

PSPD and Lawyers for a Democratic Society have proposed legislation to ensure that corporations treat their distributors fairly.

However, the FTC opposed legislation, saying there are no problems at 99 percent of distributors.

An FTC official was quoted by the PSPD as saying that if Namyang Dairy operated its business based on the incentive system, it is hardly likely it would fine distributors hundreds of millions of won.

The PSPD said such a response ignores the reality of the retail industry.

The council of CJ CheilJedang’s distributors plans to continue activities such as reporting cases to the FTC, protesting at headquarters to call for negotiations, and pushing for legislation and impartial investigations by the FTC.