A tourist spot, left, at Jeung Island in Shinan County, South Jeolla. On weekends, a large influx of cars into the island causes confusion around the wooden pier, on the right. Shinan County is seeking to control the car traffic starting next summer. By Oh Jong-chan

But the bridge has its downsides. The islands have become a hit with tourists and they can barely support the large influx of automobiles. Up to 830,000 tourists visit per year and on holidays an average of 4,000 cars flood the main road, even filling the streets used for farming purposes.

“On holidays, I can’t even maneuver my cultivator because there are too many cars everywhere,” Choi Jang-sun, an island resident, said. 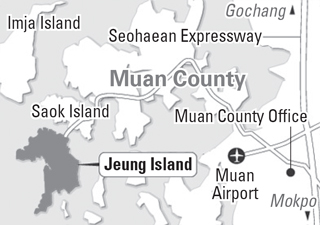 Because of the current situation, it is often said “Jeung Island Bridge has turned the ‘slow city’ into a ‘quick city.’?”

In 2007, Jeung Island was the first district to be classified as a “slow city” in Asia. A “slow city” refers to a “happy, healthy, unpolluted place slow in development,” free from the sweeping movement toward urbanization and industrialization.

In response to the traffic problem, the Jeung Island government took action. They are building parking and transfer facilities on a 30,413-square-meter (7.5-acre) empty lot situated at the entrance of Jeung Island Bridge.

“The construction is designed to be finished this year. We will start controlling car traffic beginning next summer,” Kim In-su, chief of the Culture and Tourism Department at Shinan County Office, explained. Tourists will be encouraged to park their cars as they enter the island and instead to travel around on electric buses and bicycles.

The government plans to replace the approximately 620 local cars with electric cars or regulate local car use on a no-driving system basis. As a substitute, Shinan County has allocated 1,050 bicycles to Jeung Island and distributed 550 blue bicycles with nametags to local residents.

Formerly, Jeung Island has been already making efforts to ban smoking and the use of synthetic detergent.

Since 2009, Shinan County has supplied 1,036 households there with natural detergents for both laundry and kitchen use for free. As a result, no local resident uses synthetic detergent.

“Aquatic animals such as freshwater snails, mudfish and carp have increased in variety and number. The outbreak of atopic and hand dermatitis also has been significantly reduced,” noted Kim Eul-bae, head of the Shinan Agriculture Technology Center.

Similarly, synthetic pesticides and fertilizers are slowly being phased out.

The plan to make Jeung Island smoke-free has also had a significant outcome. Out of more than 2000 local residents, less than 50 smoke. Local health centers hold anti-smoking clinics, and five shops and three vending machines selling cigarettes have been shut down in exchange for compensation. One remaining cigarette shop will also be closed down soon.

Last October, an ordinance to create a fine of 20,000 won ($17.28) for smoking on the island was issued, and it will be fully enforced starting from the beginning of next year after a public grace period.