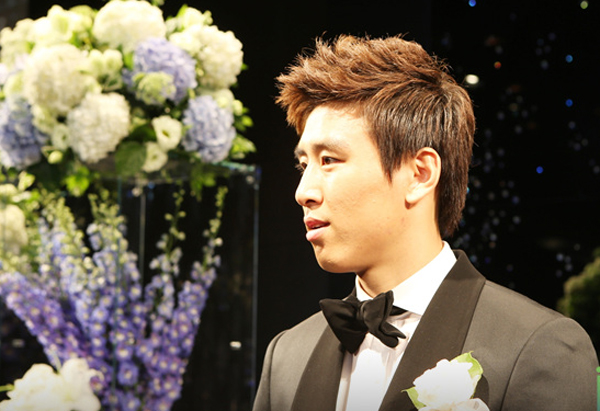 “Congratulations on your wedding and I sincerely wish you a happy marriage,” Changmin, 25, said among friends and family of the 24-year-old Augsburg midfielder.

Koo married a Jeju woman three years older than him at the Sheraton Grande Walkerhill Hotel. He was known to have dated her when he played at Jeju United between 2007 and 2011. The wedding was conducted behind closed doors.

“I am thankful for my bride who has kept by me over the past six years,” Koo said at a pre-wedding press conference.

Koo, the captain of the bronze medalist team during the 2012 London Olympics, is known for having many friends and acquaintances .

Actor Kim Su-ro hosted the wedding, while Jung Hae-seong, the head of the Korea Football Association competitions committee who was a Jeju United head coach between 2006 and 2007, officiated.

Ki Sung-yueng of Swansea City, who is to marry actress Han Hye-jin a week from now, was also at Koo’s wedding.

“Ja-cheol is getting married a week earlier than me, and many players of our age would also marry this year, so I think we would be able to have a stable performance next season,” Ki told reporters before the wedding.

Koo is to return to Germany this week.