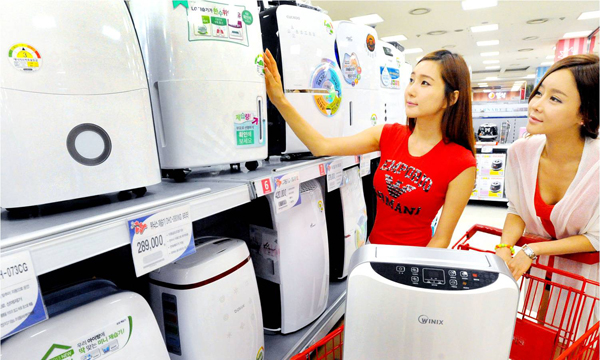 Shoppers look for dehumidifiers at Homeplus on Wednesday as they prepare for the early monsoon season. Provided by the company

For the first time in 30 years, heavy rain is expected to start in Seoul instead of slowly working its way up from the south - and retailers have taken notice.

They have revamped marketing plans and sales promotions in expectation of heavy monsoons, especially since the Korea Meteorological Administration has predicted stronger and more frequent downpours.

Shinsegae Department Store is holding a “Style in the Rain” promotion including all the items related to the rain such as rain accessories, dehumidifiers and ingredients for kimchi pancakes, a popular food during the rainy season in Korea.

Other items include a variety of raincoats, windbreakers, rain gear, refreshing fragrance products and must-have fashion items such as umbrellas and rain boots. Sales will last until Thursday at the store’s Yeongdeungpo branch in northwestern Seoul.

Fashion companies such as Furla released high heels made of waterproof PVC material, rain boots with shoelaces, waterproof handbags and other fashion goods for the rainy season.

It will also introduce a variety of vividly colored fashion umbrellas made by European brand Florence & Fred.

The store also sells trench coats for adults and children in matching beige, navy and red so that they can create a style for the family.

Statistics back up the store’s efforts, as sales of umbrellas and raincoats at Homeplus surged 70 percent last week compared to the week before.

Sales of dehumidifiers surged 1,100 percent from June 1 to June 17 compared to the same period last year, as consumers purchased them to eliminate dampness in the house.

“With the forecast of heavier rain during this monsoon season compared to last year, we doubled the volume of rainy season goods and enhanced the variety of umbrellas and raincoats as they have become fashion items,” said Chang Jung-woo, a buyer of the general merchandise team at Homeplus.

Homeplus will lower prices of 10 dehumidifiers by 10 to 30 percent.