Currency swap with Japan called off

Currency swap with Japan called off 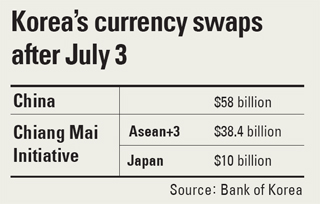 Korea and Japan decided to end the $3 billion currency swap arrangement that was due to expire July 3.

No explanation was given for the decision although there has been growing speculation that soured relations between the two countries since last year would lead to an end to the agreement.

Earlier this month, Japan’s Sankei Shimbun newspaper said Tokyo was not planning to extend the currency swap unless Korea asked for it, quoting a Japanese government official.

With the decision, the only currency swap agreement remaining between the two countries is the $10 billion agreed upon under the larger Chiang Mai Initiative, which also involves the 10 members of the Association of Southeast Asian Nations and China. The $10 billion swap is scheduled to expire in February 2015.

“Bilateral currency swaps are made to benefit each country and not so that one could take advantage of the other,” said BOK governor Kim Choong-soo at a press conference held after its monthly monetary committee meeting held earlier this month. “If both sides could benefit, the currency swap could be extended.”

“Until now we only used parts of the currency swap we made with the U.S. in stabilizing the financial market,” Kim added. “We have not used other currency swaps.”

After the global financial crisis in late 2008, Korea signed a $30 billion currency swap with the U.S., which was its first with the country. That currency swap was not extended when it expired in 2010.

Prior to 2008, the currency swap arrangement between Korea and Japan stood at $3 billion, which was boosted to $20 billion at the height of the 2008 global crisis.

In October 2011, the countries further expanded the deal to $70 billion as the credit crisis in southern Europe started to become a major crisis.

A year later, Japan let $57 billion of the agreement expire after bilateral relations nosedived after President Lee Myung-bak made a visit to the disputed Dokdo islets, which Japan also claims. He was the first Korean president in office to set foot on the islets.

President Lee further angered the Japanese when he said the Japanese emperor should wholeheartedly apologize to those who lost their lives fighting for Korea’s independence under its colonial rulers if he wanted to visit Korea.

The two countries have been at odds especially since Prime Minister Shinzo Abe took office in December.

Market analysts said the impact of the end of the currency swap with Japan will be limited since the amount is small and Korean financial markets are relatively stable, although the likely tapering of U.S. quantitative easing has brought some turmoil to the markets.

Additionally, Korea ranks seventh in the world for foreign reserves, which allows the country to cushion external events that drive away foreign investors.