The ratio of the top 20 companies by market capitalization on the Seoul main bourse dipped compared to the end of last year largely due to dumping of shares by foreign investors.

Market capitalization of these companies is expected to fall further as the Kospi continues to spiral down to its lowest level in nearly a year sparked by growing anxiety over indications the U.S. Federal Reserve is poised to begin tapering its stimulus program.

According to the Korea Exchange, the top 20 companies accounted for 50.08 percent of total market capitalization. This is 0.15 percentage point less than the 50.23 percent posted at the end of 2012.

The market capitalization ratio of the top tier companies had been consistently rising in recent years. The ratio was 47.91 percent in 2010 and 47.93 percent in 2011.

No. 1 Samsung Electronics has seen its share value fall for 11 trading days since June 7 after reaching as high as 1.54 million won earlier this month. Samsung’s stock closed at 1.31 million won, down 0.91 percent from Friday. 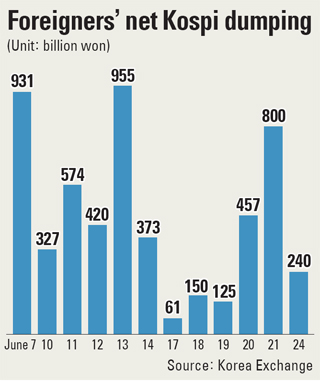 In the first six months of the year, SK Group affiliates moved up in the top 20. Conglomerate flagship SK Telecom rose to ninth place from 14th at the end of last year, while chipmaker SK Hynix went to sixth from 11th.

New names in the top 20 were Web portal company NHN, which ranks 14th, and Samsung Fire and Marine Insurance at 19th.

Market capitalization of the top companies is likely to shrink further as foreign investors are expected to continue their selling spree in the wake of last week’s remarks by U.S. Fed Chairman Ben S. Bernanke regarding the start of quantitative-easing tapering by the end of the year.

The market later in the afternoon seemed to be stabilizing on the backs of institutional investors, but later tumbled below 1,800. The previous low point of the year was June 21, when the market closed at 1,806.02.

Foreign investors continued their net selling for the 12th consecutive day and have dumped more than 5 trillion in shares in nearly two weeks.

“There is currently an absence of any momentum that could turn the situation around and investors will probably wait until they believe the market has hit bottom,” said a Hyundai Securities analyst. “The current situation will likely continue for the time being.”

Some market experts project investors will wait until the Bank of Korea announces the current account balance on Thursday.