Carmakers hail the value of taxis

Carmakers hail the value of taxis 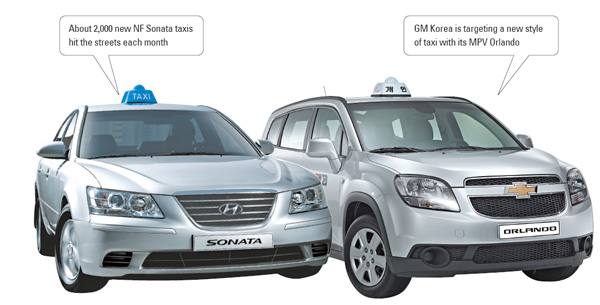 It’s been five years since leading Korean automaker Hyundai Motor pulled the NF Sonata from its showrooms and stopped selling the model to the general public. Yet it’s not difficult to see brand new NF Sonata taxis still roaming the streets of Seoul.

Competition among automakers to sell their cars as taxis is heating up as they see the exposure as a good marketing tool to raise brand awareness among average consumers.

Hyundai Motors, which dominates the taxi market, is followed by its younger brother Kia Motors. Renault Samsung Motors is trying to make inroads with the SM5 and GM Korea is trying to develop a niche by offering larger vehicles as taxis.

As of March, Hyundai Motor had more than 165,000 cars registered as taxis operating in Korea, while Kia Motors’ had 54,900 Kia Motors. Together, the two account for 88 percent of all registered taxis in Korea. Renault Samsung is third with 22,230 and a market share of 8.9 percent, followed by GM Korea whose market share is just shy of 2 percent. 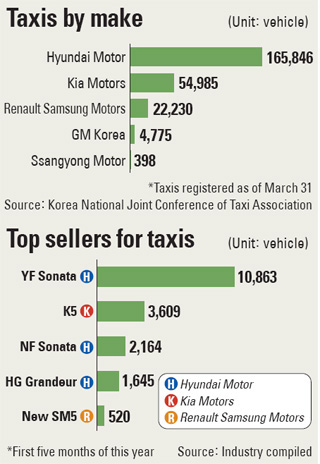 “Some taxi drivers think the curvy YF Sonata’s design is too flashy and therefore some still prefer the straight and simplistic design of the NF Sonata,” said a taxi industry official.

Hyundai Motor said selling more of its cars as taxis is good for business.

“On average, a taxi travels 300 kilometers [186 miles] a day and picks up 33 passengers,” said a Hyundai Motor official. “Even when the taxi happens to be an old model, frequent exposure helps boost sales.”

YF Sonatas sold as taxis in the first five months accounted for 36.7 percent of the model’s total sales.

Hyundai Motor believes YF Sonata taxis help the vehicle continue as one of the top-selling midsize models in Korea. The first YF Sonata was produced in September 2009.

“Because the taxi is the cab driver’s livelihood, they prefer an automaker that has a large number of official repair shops that offer quality control and speedy access to parts,” a Hyundai Motor official said. “We are able to sell that many cars as taxis because of our solid service network.”

Kia Motors, the affiliate of Hyundai Motor, is rising to the challenge by targeting cabbies who prefer a vehicle other than a Sonata.

“I picked the K5 since Sonatas are everywhere,” said a 58-year-old driver. The cab driver switched his EF Sonata for a K5 in April. “[K5] quality is compatible to a Sonata.”

Meanwhile, Renault Samsung has a sentimental stake in Korea’s taxi business as the company that made automakers realize the marketing impact of selling cars to cab drivers.

In 1999, before Samsung was acquired by French automaker Renault, the company was looking for a way to rebuild its image after court receivership.

The only model it was selling was the midsize SM5, which used a metal timing chain. This attracted the interest of cab drivers who have to change their rubber timing belts every 100,000 kilometers.

Additionally, the automaker had a marketing campaign offering free maintenance for cab drivers.

“Renault Samsung at the time knew the importance of cab drivers’ word of mouth and based their strategy on that,” said Lee Nam-seok, business management professor at Chung-Ang University.

“Most of them became loyal fans, and the ones who drove the SM5 from the beginning drive the latest SM5.”

GM Korea, although far behind its rivals, is trying to enter the market with a different approach. While taxis have traditionally been passenger vehicles, GM Korea since has been selling the compact multipurpose vehicle Chevrolet Orlando as a taxi since November. It has sold roughly 250 of the vehicles.

“First, I like how the view is open, and it is comfortable to drive,” said a 59-year-old cab driver, who has had an Orlando since January. He also likes the spacious cargo area and interior, and enjoys traveling with his family when off duty.

But he said driving an MPV as a taxi has its own unique issues. “Some customers either think it’s the more expensive luxury taxi or a call van and refuse to get in,” he said.