The trauma of shunning growth

The trauma of shunning growth 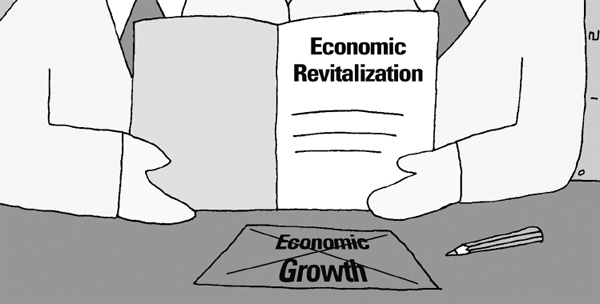 Half of 2013 is gone. The government will soon have to come up with an economic policy outline for the second half of the year. The government is expected to raise its estimate for this year’s growth rate to between 2.6 percent and 2.8 percent from its earlier estimate of 2.3 percent on hopes of a faster recovery in the latter half. That would mean the economy would have to grow 3.6 percent on year in the second half, doubling the pace of 1.8 percent in the first. But is this really plausible?

The government turned slightly optimistic for the second-half economic outlook on stable oil prices, pickup in global economy and effect from fiscal stimuli actions. But there are too many risks to bet on a moderate recovery in the second half. The U.S. Federal Reserve announced that it will wind down its five-year quantitative program, sending shock waves to financial and capital markets in emerging economies. The European economy is still under squeeze from fiscal deficits and could recede further. There are signs that all-out fiscal and monetary stimuli policies dubbed Abenomics, driven by Japanese Prime Minister Shinzo Abe, could backfire. Worse, the Chinese economy - Korea’s biggest consumer market - is feared to be heading toward a hard landing.

These external factors all can work unfavorably toward the export-reliant Korean economy. Domestic demand is hardly a comfort. Construction, shipping and shipbuilding sectors are mired in a prolonged slump. Despite deregulation and stimuli actions, the real estate market remains lethargic. Companies are unwilling to invest with various regulations aimed to choke corporate activities pending at the National Assembly. With unpromising signs on the external and domestic fronts, the government’s outlook on the second-half economy may just end up as wishful thinking.

The new Park Geun-hye administration does not aim to propel growth. The only specific number it targets on the economic front is an employment rate of 70 percent. Boosting growth is not part of the state agenda. The government hopes for economic recovery, but does not set goals to attain it. It vows to make policy endeavors to “revitalize” the economy, not “promote” growth. It refrains from specifically mentioning growth.

“Growth” has been a taboo word from late 2011, in the last stage of the Lee Myung-bak administration. Lee, who won the election with promises to revive the economy, received major setbacks in his first year with nationwide protests against American beef imports and the global financial meltdown in 2008. During the legislative and presidential elections last year, the ruling and opposition parties focused on welfare campaigning instead of promises about economic growth. Policies designed for growth were tossed out as passe. Politicians were engrossed in rolling out populist welfare policies. Promises for growth were lost in the flood of welfare pledges during the presidential election last year.

Coincidentally, growth began to slow as attention to growth diminished. Following the global financial crisis, the economy grew a mere 0.3 percent in 2009. It rebounded by 6.3 percent on year in the following year, but sank to a 3.7 percent pace in 2011. In the first quarter of 2012 amid the absence of a growth policy, the economy slowed to an under 3-percent pace to edge up a mere 1.5 percent in the final three months of the year. It is unclear if growth slowed due to a lack of policies earmarked for growth or if the economy’s slow motion discouraged the government from pursuing growth. But either way, the disinterest in growth conundrum continued onto the Park Geun-hye administration. The new government appears to have given up hope, as there are no immediate solutions to boost growth.

Inattention to growth, however, led to policy confusion and uncertainty for the short term as well as the long term. Without clear will and targets on growth, various policies cannot be executed or could end up conflicting with one another. Without growth - a fundamental pillar of economy - the government won’t be able to finance new welfare programs.

Without growth, it also cannot raise the employment rate to 70 percent. Endeavors toward a “creative economy” also would be lost. Short-term and long-term economic policies can only harmonize under a large framework pursuing economic growth. Various economic policies the government has introduced during its four months in office proved ineffective because they were not led and focused under a specific growth goal.

Because of a lack of policies to drive growth, the government is running short on tax revenues and jeopardizing its fiscal integrity. Economic recovery is unclear and financing means for welfare spending uncertain. Enacting anti-corporate regulations without any consideration on their impact on growth dampens corporate investment spirit and industrial activity. The neglect and disinterest in growth will keep the economy in slow gear.

We should not go back to the old days when the government obsessively hung on growth figures. But the government must find new growth models and paradigms. To neglect economic growth because growth does not come easily is like no longer feeding a child because he stopped growing.