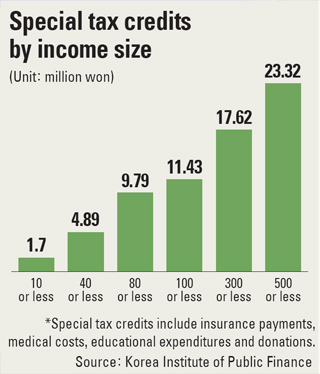 The Ministry of Strategy and Finance plans to slash income tax exemptions for top earners to help compensate for shortfalls in tax revenue.

The government has been looking into overhauling the tax system and eliminating tax credits to raise about 17 trillion won ($14.7 billion) over the next five years, part of an effort to raise funds to pay for President Park Geun-hye’s welfare pledges.

“Current tax exemptions and credits need to be overhauled, since there are many overlapping expenditures,” Hyun said.

At a public hearing yesterday, the Korea Institute of Public Finance said there are 226 tax exemption and credits that should be reviewed and possibly eliminated.

“Those rules were made with the intent to promote economic activities by certain taxpayers, but if they don’t have any visible effect, the rules rather undermine efficiency in the distribution of resources and the fairness of taxation,” said Kim Hak-soo, research fellow at the institute.

This year alone, the Finance Ministry plans to adjust or reduce 3.4 trillion won in tax exemptions.

Every year, about 30 trillion won disappears from government revenue due to the exemption rules, Kim said. The amount has grown by about 7 percent annually from 13 trillion won in 2000.

The income tax exemption accounts for more than 30 percent of the total exemption costs.

According to data from the institute, about 11.6 trillion won worth of tax credits were given to large businesses and top earners last year, about 40 percent of the total.

The institute said Korea’s income tax revenue amounts to 3.5 percent of GDP, far below the average of 8.9 percent for OECD countries.

Under the current system, high-income earners receive more exemption benefits than average earners, such as special exemptions for social insurance payments, and medical and educational expenditures.

The ministry has decided to rectify the system in a way that makes it fairer for low-income earners.

Current income tax law applies tax rates of 6 to 38 percent to the annual incomes of individual earners. If they spend money in cash, they get a 30 percent credit for income tax payments, while getting a 15 percent credit when using credit cards. This could be eliminated or altered to minimize the reductions, according to the ministry.

The ministry also is pushing for a new system that cuts how much a person should pay as income tax instead of using tax credits, especially targeting top earners.

A final version of the exemption cuts will be included in the 2013 tax reform plan scheduled to be announced in August.?

For conglomerates, the ministry plans to cut a 10 percent tax credit for construction of energy efficient and environmentally-friendly buildings to 3 percent. For small businesses, the rate would be cut to 7 percent.