Model picks up a camera

Model picks up a camera 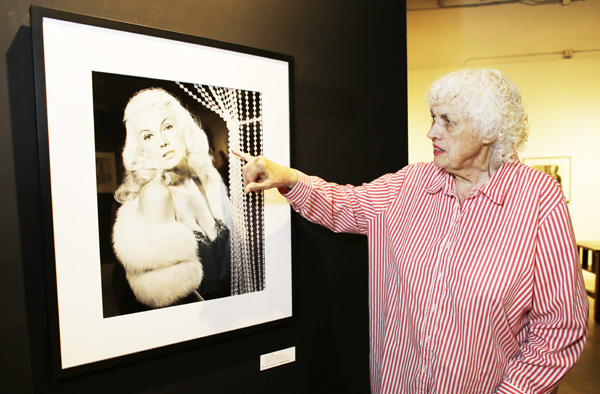 MIAMI - Bunny Yeager was a photographer at a time when men dominated that profession, but the model turned pin-up photographer used that to her advantage when photographing women in the 1950s and 60s.

She was able to make everyday women, from stay-at-home mothers to airline attendants, feel comfortable enough to bare it all. In the mid-1950s, she helped jump-start the career of then-unknown Bettie Page with her photo in Playboy. More than five decades after shooting the well-known stills of Page in a leopard-print bathing suit standing next to a real cheetah, 40 framed prints of her work are on display in a gallery in Wynwood, Miami’s arts district.

“They all wanted to model for me because they knew that I wouldn’t take advantage of them,” Yeager, now 83, said of her models. “And I wouldn’t push them to do nude if they didn’t want to do nudes. It wasn’t a day when nude photography was prevalent.”

Wes Carson, a photography instructor at the Miami International University of Art & Design, said the way women were “surveyed” in Yeager’s photographs was distinct from her male counterparts.

“When I look at her work, the women have a different demeanor,” he said. “They are more confident. They are in charge of their sexuality, where if you look at someone else’s work the women are much more dismissive and demure.”

Last year, Yeager, a Pennsylvania native, published the coffee table book “Bunny Yeager’s Darkroom” and is working on another book that will include her photos of Page. The German fashion house Bruno Bananai has a new line of swimwear based on the bikinis she designed for her models and she plans to photograph models again in her studio, if requests come in.

Yeager, whose real name is Linnea Eleanor Yeager, was one of the most photographed models in Miami during her early career. Soon after taking a photography course at a local college, Yeager turned the camera on herself as she posed in bathing suits she handmade for her 5-foot-9 frame. Her self-portraits were turned into a book, “How I Photograph Myself,” in 1964 and many of those photos - including Yeager in a red-striped low V-cut bathing suit and a white bikini covered in real daisies she glued on one by one - adorn the walls of her Miami gallery. The prints range in price from $1,200 to $3,000.

During the 1950s and 1960s, Yeager was one of the top fashion models and photographers, publishing about a dozen books. She shot stills of the Swedish actress Ursula Andress, who was starring in the 1962 James Bond film “Dr. No.” The famous shot shows the actress in a white bikini, a knife sheathed at her side.

Yeager continued to work, but over the last decade, several magazines began to struggle or went out of business. Yeager was no longer in demand.

“There was a big portion of time where I hadn’t been doing anything,” Yeager said of her hiatus. “It wasn’t that I was retired, it’s just that nobody wanted my photos. I had no requests. No inquiries. Nothing. It was like I didn’t even exist.”

But in 2010, the Warhol Museum in Pittsburgh held an exhibition of her work. Now, there is the Miami exhibition.

“I haven’t gotten used to it yet,” Yeager said of the recent attention. “And I still get that little tingle when I see the photos on the wall.”

In her studio, Yeager keeps a stash of photos no one has seen in cabinets. Some she plans to save for her next book. Others will serve as a snapshot of what’s yet to come for Yeager and the next generation of female photographers.

“I’m still feeling like a little child and excited over everything new that comes along in my life. I don’t know where it will lead to yet, but it sounds good to me.” AP