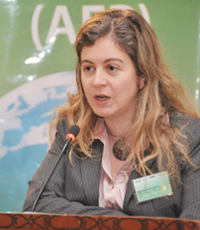 Tunisian Hela Cheikhrouhou, a director of the African Development Bank, was chosen as the inaugural head of the Green Climate Fund (GCF) Secretariat at a board meeting in Songdo, Incheon, on Wednesday.

The board of directors of the GCF selected Cheikhrouhou as its first executive director during a four-day meeting which kicked off Tuesday in Songdo, the built-from-scratch city where the so-called environmental World Bank is expected to open its secretariat headquarters later this year.

The 24-member GCF board entered its selection process for executive director in April and chose Cheikhrouhou, currently director of the Energy, Environment and Climate Change Department at the African Development Bank, out of a shortlist of three final candidates.

Cheikhrouhou “was selected from a pool of high-caliber candidates,” said Australian Ewen McDonald, co-chair of the GCF board.

Helming the secretariat of the fund, Cheikhrouhou, who visited Incheon for the first time for the board meeting, will also oversee the settling of the GCF in its new home in I-Tower, Songdo. Educated in Tunisia and Canada, she launched her career as an investment banker with Citibank and has over a decade of experience working in multilateral development banks, including private and financial sector development in Latin America with the World Bank.

Zaheer Fakir, South African co-chair of the GCF Board, said that Cheikhrouhou’s “financial expertise, coupled with her drive and enthusiasm, will help establish the fund as an effective and credible funding facility to tackle climate change in the developing world.”

The fledging fund made headway with its fourth board meeting deciding on key operational policies, accrediting 78 organizations from private and public as observers of GCF and launching an international logo design contest for young designers which runs until next month. Cheikhrouhou hopes to “make the fund a central contributor to the global financing of developing countries’ response to climate change, with particular attention to the most vulnerable.”