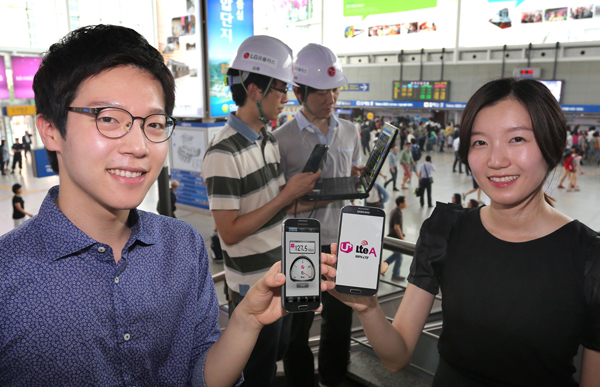 LG U+ employees test out the new LTE-A service at Seoul Station. It will be offered to customers from next month.

A high-definition four-megabyte MP3 file can download in 0.2 seconds, and a one-gigabyte movie takes just 53 seconds. The resolution is four times better than the original.

This is all available through LG U+ long-term evolution advanced (LTE-A), which will be offered from next month - two months earlier than planned. It offers speed 10 times faster than 3G and twice as fast as regular LTE service.

Despite the explosion of LTE users since last July, LG U+ has had no problem in providing the optimized speed. It continues to establish data networks in 84 big and small cities across the country along with its multicarrier (MC) technology.

The new LTE-A service features two key pieces of technology, including MC technology, which allocates an alternative data frequency range if the first is extremely busy. The other, carrier aggression technology, accelerates data to move 50 percent faster than the cable Ethernet used at home. It does so by simultaneously detecting different frequencies and combining them.

LG U+ has emerged as the market leader in the last two years as the operator constructed the world’s first nationwide network and commercialized the voice-over-LTE service, which provides voice calls with HD-quality sound at the same price.

In the next half of the year, the company will build more LTE base stations at locations with heavy data traffic. All upgrades needed for LTE-A will be done in next three months.

The carrier will also release smartphones specially designed for the service starting next month, including the Galaxy S4 and Optimus G2.