Many faces in Japan

Many faces in Japan 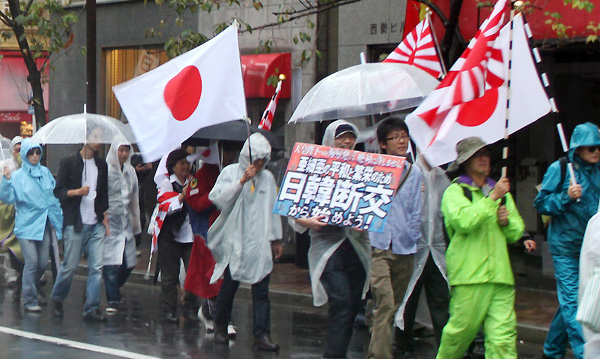 About a hundred students were waiting outside for the gates to open at a school in Yeouido on an early morning on Sunday two weeks ago. They were candidates sitting a Japanese language proficiency test called the Examination for Japanese University Admission for International Students, or EJU. But the crowd of students who have learned the language because they like Japan and wish to learn more about its society has become smaller than previous years. Those coming out of the subway and heading toward the exam venue also weren’t that many. Empty seats were noticeable in classrooms.

The EJU takes place twice a year - June and November - for foreign students who wish to enter universities in Japan. The number of Korean applicants, which topped 2,000 in June 2008, have been decreasing since 2011. In November, 1,278 people sat for the test. Among them, 954 were from Seoul; the first time the tally from the capital fell below 1,000.

The disastrous radiation leak at Fukushima after the tsunami and earthquake in 2011 and the strong yen served as a dampener on the choice of overseas study in Japan. But another factor was added recently. On Sunday, a right-wing group called the “Civilian Group Opposing to the Privileges of Foreigners” staged anti-Korean demonstrations in Koreatown in Shin-Okubo area in Tokyo. The nationalists clashed with opposing forces. The group’s ringleader was arrested by the police for using physical violence. Nationalist group members tweeted for people to rush to the police station to protest the arrest.

The ultra-right group believes foreigners, especially ethnic Koreans, have stolen their rights and benefits. But few of the ethnic Koreans who have endured so much discrimination and hardship during their life in Japan would agree. The group hardly serves a reasonable purpose. They are just a bunch of whining losers looking for scapegoats for their suffering and loss of pride from a lengthy recession and the country’s waning global status.

Who would send their children to a country where people threaten “to kill Chosenjin (Koreans)?” Their violent rhetoric is no different than what is coming out of the mouth of the North Korean regime. From their intimidating words, Japan is no safe place for foreigners. No matter how advanced the society may be, it is nevertheless a risky place to be for non-Japanese.

Fortunately, the far-rightists are not welcome in their own country. The moderate voice may not be as loud, but it pointedly criticizes the extreme and hate rhetoric of nationalists.

There is a word, ichimaiiwa, in Japanese, meaning a monolith. The word also can refer to a rock-solid and rigid organization. The conservative and nationalist section of Japan looks like a large slab of rock. But that is not all of Japan. Japan runs on diversity and centrifugal force. It just takes time for such engines to gather force.

The anti-Korea and anti-Japanese fervor is just a clash between the extremes and do not represent the whole. It is time for the roots and bodies to show themselves. They must position themselves stoutly so that all the twigs and branches shake the whole tree. There are still young people who love Korea and Japan as they are.