Exhibition born from moments of awe

Exhibition born from moments of awe

Lee Yong-baek’s installation work “Broken Mirror” (2011) gives viewers the illusion that the facing mirrors have been shot by a gun, then cracked and shattered, accompanied by the “bang” of a gunshot from the installed speakers. Viewers also see their reflected images cracked and shattered. The work is exhibited in the ongoing “The Moment, We Awe” show at Hakgojae. Provided by the gallery

Today, in the flood of images we see everyday, it is difficult to feel awe from a visual artwork. It might be more difficult for a veteran curator such as Yun Chea-gap.

Still, the 45-year-old Korean curator, now working as director of the How Art Museum in Shanghai, China, named a group exhibition of six Korean and Chinese artists he curated “The Moment, We Awe.”

“I selected the six artists on the one criterion - they brought awe to me,” Yun said late last month during a press preview of the exhibition, which runs through July 28 at Hakgojae gallery in central Seoul.

“In the life of the secular world, the moments that we [feel] awe, although they seem very rare, explicitly exist,” he said, citing the moment that he saw children sprinkling red flower petals and singing in the early morning in a village in Annapurna, Nepal, as an old traditional daily event, about 15 years ago. 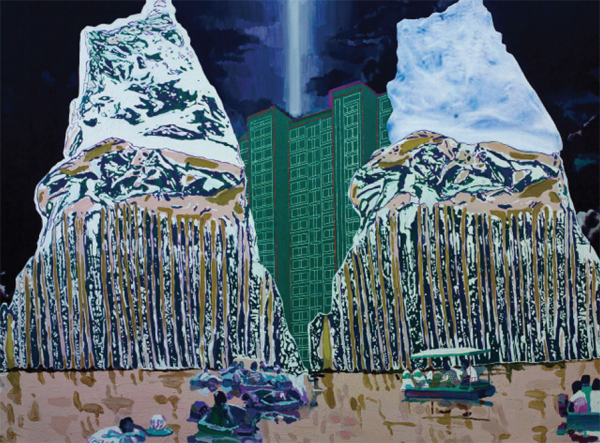 Jin Yangping’s “Urban Maze No. 2” (2011), above, and other paintings show a Chinese urban landscape mixed with images from films.

“The works by these six artists are the ones which caused me to feel sublime,” Yun said. “These artists include my old friend that I have known for more than 20 years, and ones I have only known for less than six months.”

The exhibition starts with Jin’s paintings and Ni’s coin works.

In Jin’s large-scale oil paintings are Chinese urban landscapes mixed with the scenes of movies and scenes of martial arts.

As for Ni’s works, they are traditional Chinese landscapes drawn on small coins about 2 centimeters (0.7 inches) in diameter.

The Germany-based Korean artist Lee Seok’s “Quadratur (Homae to BJ Blume)” (2012) is also among the exhibits.

Seeing young artists give up their careers and take office jobs in the aftermath of 2008 global financial crisis, Ni came to question about money, and then reached the idea to “make money by money,” the artist said. So, he is selling his works - drawing on the surfaces of coins that he hammered flat and rubbed.

The installed mirrors, showing both projected images and the viewers’ reflected images, give viewers the illusion that the mirrors facing them have been shot by a gun and then are cracked and shattered, accompanied by the “bang” of a gunshot from the installed speakers.

Along with it, the viewers come to see their reflected images cracked and shattered. The work was exhibited at the Korean Pavilion in the 2011 Venice Biennale, where Lee was the representative. It is now shown in the same style in this exhibition at Hakgojae.

The other artists’ works are on display at the separate building belonging to the gallery. Qiu’s drawings and video works based on the drawings twist history centered on a few famous figures.