Konex for start-ups is in business

Konex for start-ups is in business 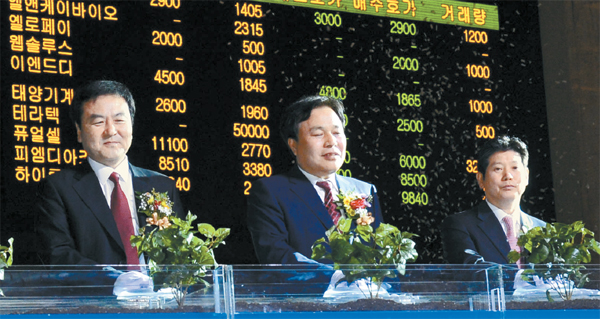 The Korea New Exchange, the country’s third bourse also known as Konex, will serve as the foundation of a creative economy by allowing start-ups to grow at an early stage and make profit to reinvest, Shin Je-yoon, chairman of the Financial Services Commission, said yesterday.

“Ever since I became FSC chairman, I’ve continuously brainstormed ways for the finance sector to support creative economy,” Shin said. “One of the results is the Konex market.”

Shin’s remarks were made at the opening ceremony of Korea’s third stock exchange, exclusively for venture companies and start-ups. The other two markets are the Kospi and the tech-heavy Kosdaq.

The 21 listed companies are from a variety of sectors, including bio-technology, semiconductors and software development.

Shin, meanwhile, added that the Konex market will help small and midsize companies and venture companies to sprout new buds in an environment like “Death Valley,” referring to the big gap between early investment and profit-making for reinvestment.