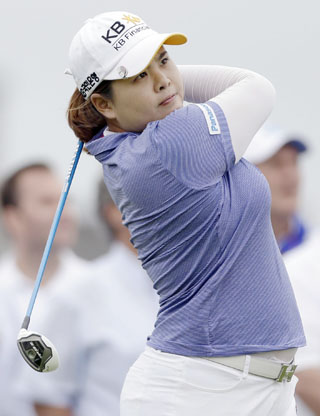 A career Grand Slam, that is. The single-season variety was just too outlandish.

Yet she’ll head to St. Andrews next month for the Women’s British Open with a chance to become the first player to go 4 for 4 in majors - whatever that may be called, now that there are five majors in a year.

“Whether I do it or not, I’m just a very lucky person,” Park said on Sunday after winning the U.S. Women’s Open for the second time.

Park’s four-shot victory at windy Sebonack would seem to bode well for Scotland, though the world’s top-ranked player has won in pretty much every situation this season on the way to six titles, including all three majors and three straight tournaments overall.

Park talked on Sunday about how calm she felt, and Annika Sorenstam could only marvel. Sorenstam was the last player to try to win the year’s first three majors, in 2005, and she didn’t come close at the U.S. Women’s Open.

“I was NOT calm,” she said with a laugh. “I know the pressure you can feel, the expectations,” Sorenstam added. “She’s handled it beautifully. Nothing seems to faze her.”

She’ll head home to Korea for a rare visit before the British. Park knows she won’t get much time to herself there, but she wants to share her success with the fans who wake up in the middle of the night to watch her play.

St. Andrews, the birthplace of golf, seems only appropriate as the course for Park to potentially make history, Sorenstam said.

Park will just have to keep not thinking about that on the course.

Beecher said she’ll glance at leaderboards but excels at not worrying about what other players are doing. The rest of the field, though, will have a hard time not noticing if Park quickly pulls in front again.

“You don’t even know if she has a pulse out there half the time,” said Paula Creamer, who tied for fourth at Sebonack. “Doesn’t matter if it’s a good shot or a bad shot, I think I’ve seen her actually smile maybe 10 times.”

The only player to win the year’s first three majors had been Babe Zaharias in 1950 - and there were only three then.

“After Annika retired I didn’t think anybody would ever do it,” said Angela Stanford, another of the players who tied for fourth, nine strokes behind Park.

After the Women’s British Open on Aug. 1-4, the Evian Championship is from Sept. 12-15 for the year’s fifth and final major. If Park can win at St. Andrews, everyone will need to decide whether a new term is required for winning all the majors.

Park recalled when there were other players she thought she couldn’t beat. She kept working at her game and proved herself wrong. So she figures there’s no reason her rivals won’t do the same now.

“I know I have a long ways to go to go somewhere like what Yani [Tseng] or what Annika and what Lorena [Ochoa] have achieved,” Park said.

No matter what happens in Scotland, Park will always be the first player in the modern era to win the year’s first three majors.

“We might not see that again for another 60 years,” said Sorenstam, now an analyst for Golf Channel.

Park and Beecher didn’t talk about the record book until after she hit her third shot on the par-5 18th hole on Sunday.

“I just said to her, ‘Mate, you’re just about to join history, enjoy this walk,’” the Australian recalled.