Kim Jae-wook to get married

Kim Jae-wook to get married 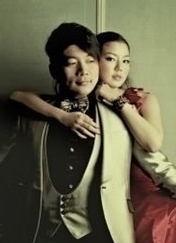 Comedian Kim Jae-wook, 34, has announced plans to marry his girlfriend, a stewardess who is 10 years his junior.

His spokesperson said, “Kim will get married between late October and early November, but he has not yet planned any details, like a date or place.”

Kim met his bride-to-be in 2008, when they worked as the faces of their college. At first, Kim was drawn by her beauty but later he decided to marry her because of her simple and considerate side. They recently had a formal family meeting for the wedding and got their parents’ approval.

The bride-to-be, who is working as a stewardess for a local airline, has reportedly competed in the regional contest for Miss Korea in South Gyeongsang?province.

Kim is a comedian on KBS, who broke in on the entertainment scene in 2005. He gained recognition for comic mockery of popular characters like “Napdeuki” from the movie “Architecture 101.”