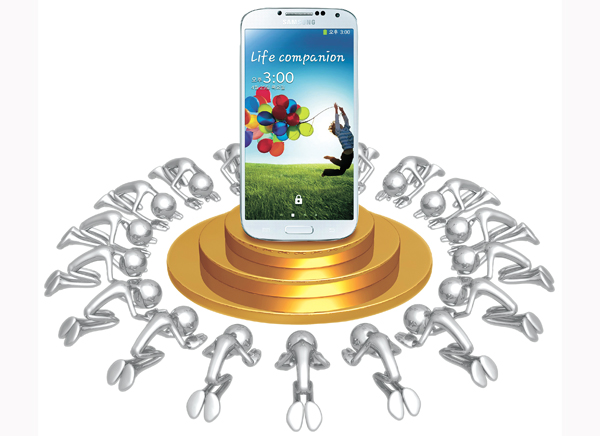 Contrary to widespread belief, Samsung Electronics smartphone users seem to be more loyal to their brand than users of Apple’s iPhone - at least in Korea.

A survey of 3,763 smartphone users aged 13 to 69 by Digieco, an economic and management research institute run by mobile carrier KT, showed that 34.6 percent of iPhone users would switch to Galaxy phones next time.

Only 16.3 percent of Galaxy smartphone users said they would opt for an iPhone when they buy a new smartphone.

When asked whether they intended to continue using the same brand, 46.9 percent of iPhone users said yes compared with 65.4 percent of Galaxy users.

The survey by Korea’s second-largest mobile service operator goes against the perception that users of Apple products are deeply loyal to the brand because of its designs and the way its products work together.

Digieco warned the survey result does not necessarily mean Samsung would see its market share advance. Since Galaxy users enormously outnumber those of Apple in Korea, more customers are actually planning to switch to Apple even though the percentage is lower.

“The survey shows Apple has room for an inflow of customers from Samsung,” said the institute in a report. “It’s true Galaxy has gained users at a rapid pace but the speed of losing customers is fast too.”

Digieco also came up with a demographic analysis of both Apple and Samsung phones. Users of iPhones are mostly in their 20s and 30s in the Seoul Metropolitan area and larger cities but Galaxy users are evenly dispersed across the country regardless of age group. The income level between the two groups was not significantly different. The average monthly salary for the household that iPhone users belong to is 3.93 million won ($3,436), against 3.87 million won for Galaxy.

When asked to name the reasons for purchasing the brand, Apple users answered design, brand and operating system in order of importance, while Samsung users cited product features, brand and price.

Meanwhile, iPhones accounted for 32.9 percent of the U.S. smartphone market to rank top in the March-May period, up 0.3 percentage point from the previous three months, according to U.S. market researcher comScore on June 30. Samsung’s share advanced 1.7 percentage points to 23 percent. Combined, Apple and Samsung take up 62 percent of the world’s second-largest smartphone market next to China.