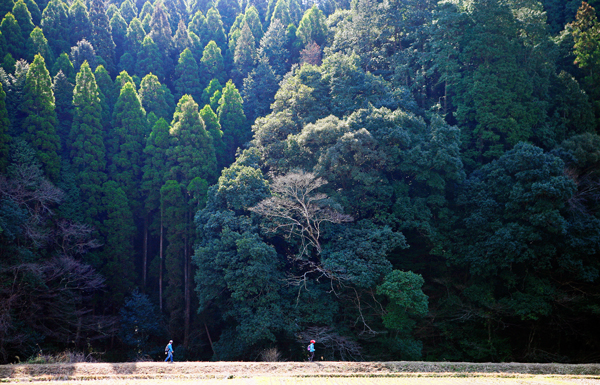 KYUSHU, Japan - It’s about 8:45 a.m. on a Monday in late May. It’s a time I usually sit nodding while listening to some pop music on an express bus heading to Jung District, central Seoul, where I go for work every day. Instead, I’m standing at the starting point of a trail in Kyushu, Japan.

It doesn’t mean that I’m traveling after I got fired from my company or I just ended a relationship with a girl and I’m trying to get over her. I was invited by the Kyushu Tourism Organization to experience three courses of the Kyushu Olle Trail with other Korean reporters and travel agency employees.

In the past few years, the Kyushu Tourism Promotion Organization and the Kyushu District Transport Bureau of the Japanese Ministry of Land, Infrastructure, Transport and Tourism have been trying to bolster the plunging tourism industry with Kyushu’s major trekking courses, which have imported both the name of Jeju Olle, which translates to “a narrow path leading home” and is one of Korea’s most famed and popular trail courses, and concepts, with a “visit Japan” promotion. 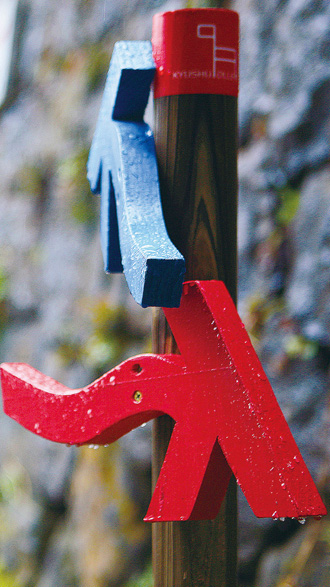 According to the Kyushu tourism organization, about 8,000 people - 4,877 Koreans and 3,230 Japanese - walked the first four courses from March to November 2012, but it estimates that the total number of visitors might be more than 10,000 because the number only includes people who came to the courses via travel agencies. More than 600,000 Koreans visited Kyushu last year.

Whether this travel is part of my work or not, I still think this is a good chance to get away from everything, especially for someone like me who hasn’t had a good vacation in the past two years. In 2011, I didn’t really have a chance to use my vacation as I had to battle with my new career. Last year, I planned a trip abroad, but had to stay at a hospital for about a week to take care of my father who had a brain hemorrhage. Many things came up afterwards, but it’s time to let bygones be bygones and I think this would be a perfect chance.

I’m wearing a pair of black sneakers, which I haven’t worn in more than six months, and a green waterproof outdoor jacket. I’m also carrying a 350-millimeter (0.1 gallon) bottle of cool water.

The first of the three trails that I walked was Takeo Olle Trail in Saga Prefecture, which is about an hour away from Fukuoka. The course stretches about 14.5 kilometers (9 miles) and starts from JR Takeo-Onsen Station. It’s easy to find signs that welcome Korean trekkers that read “An-nyeong-ha-seyo,” meaning “hello” in Korean, and “Welcome to Takeo City!” inside the station.

The course is in a green area surrounded by local residents who are ready to welcome tourists or trekkers with friendly smiles. About 30 minutes after I started walking on the course, Kimyoji Temple welcomes my group with hot tea that a small lady offers for all trekkers for free.

Another friendly sign, which read, “Please take a deep breath under clean air with a cup of hot tea,” written in Korean. It could be hard work to give 20 or 30 cups of hot tea just in few minutes, but the lady keeps her smile.

Takeo is known for its good spas and hot springs. I soaked for about 20 to 30 minutes in a spa provided in a local Takeo area hotel, which relaxed my legs and feet that were tired after two or three hours of walking. I walked in the nature, took a bath in clean and hot natural water, and had a bottle of cold beer to chill out with some sashimi in the evening. I don’t even envy Zeus, who might have been living his entire life like this in Olympus.

“Takeo trail is one of the most popular trekking courses among all Olle courses in Japan,” Takeo city Mayor Keisuke Hiwatashi told the Korea JoongAng Daily. “We can proudly say that people visiting here can get refreshed not only from the nature but also from our friendly citizens.” 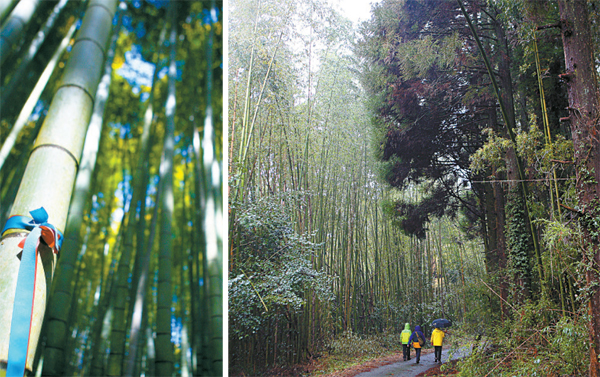 From left to right: Olle trails are labeled with blue and red ribbons; Okubungo Olle Trail in Oita Prefecture.

Accessibility is an asset for the Takeo Olle Trail as it can be reached within an hour by train or car from Fukuoka, but it could be discouraging for people wishing to avoid crowds, as I did. But my desire was completely satisfied the next day on the Okubungo Olle Trail.

The Okubungo Olle Trail is a perfect package for those who want to feel nature in a different type of environment. Unlike Jeju Olle, which mostly includes seaside views, the 11.8 kilometer-long trail in Oita Prefecture leads me into herb gardens and bamboo groves that run along the trail.

The trail has some hills in the beginning that heat up my body a bit. After climbing the course for about 20 to 30 minutes, then walking down, beautiful scenery spreads out before my eyes.

Along the right side of the trail, a river crossing two mountains came into sight. The altitude from the trail walk and the river is about 20 to 30 meters. On the river, some tourists and local residents were riding a small boat.

Leaving the beautiful site behind, I went into a bamboo grove that later led me to Oka Castle and Fukoji shrine, where you can find Kyushu’s biggest stone Buddha. I ring a bell by pulling a long white rope to wake up a patron saint and wish for my family’s health.

Some delicious meals such as yakisoba, or fried noodles, and some grilled chicken with fresh vegetables and even some Korean side dishes including kimchi and chives mixed with hot peppers and sesame oil were offered for lunch. It is hard to call the place a restaurant as it is set in a small classroom in a closed school. Instead of some complex mathematics equations, menus for the meal, some of which were written wrong with some cute mistakes in Korean that read “Fry Tofu” instead of “Fried Tofu” are on a blackboard with greeting letters.

The last trail I experienced was Myoken course in Kagoshima prefecture in Kirishima City. It takes about four to five hours to walk the entire 11-kilometer course that runs along the Myoken hot spa village, Inukainotaki Fall, Wake Shrine, Ryoma promenade and Shiohitashi Spa Ryoma Park.

The Kirishima Myoken course is a famed honeymoon place of Sakamoto Ryoma (1836-1867) and his wife. Ryoma, born in Kochi Prefecture on the island of Shikoku, was one of the greatest leaders in Japan’s modernization. The couple’s honeymoon trip is known as the first Japanese honeymoon and the Myoken course is beloved as a romantic place. It recently became a popular trail not only for local residents but also for trekkers.

The flight from Incheon Airport to Kagoshima takes 95 minutes, and then it takes another 25 minutes to reach the Myoken spa village, the starting point of the course, via a public bus that can easily be found at the airport.

As I walked about 15 to 20 minutes, a light rain began to fall, rustling the green leaves all over the side of the trail. It feels like the rain is whispering to me to turn off my music and listen to the sound that nature is creating. For a while, I close my eyes and listen to the stream coming from Inukainotaki Fall and the light rain drizzling on the trees. 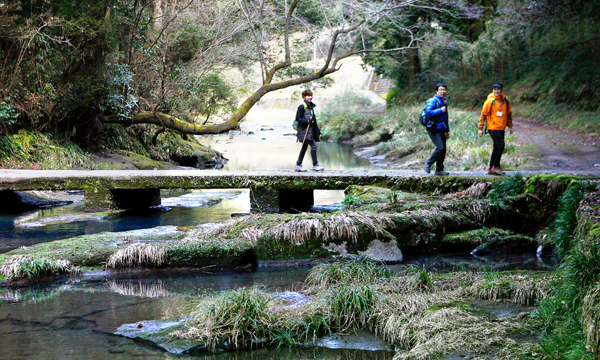 After passing the upper stream of Inukainotaki, Wake Shrine welcomes me. The shrine was established in the name of Wake no Kiyomaro (733-799) who was a high-ranking Japanese official during the Nara period. Japanese believe that any kind of wish, including passing exams for good colleges and health, come true if they pray at the shrine. Near the shrine, a Japanese wisteria festival is held between April and May every year.

The last course is Shiohitashi Spa, where Ryoma stayed the longest. In the Shiohitashi Spa Ryoma Park, some relics related to Ryoma’s life are displayed in a small museum. Free foot baths that can relax trekkers’ feet are offered at the park as well.

Other than the trail course, there are many places or events that tourists would find interesting. Every July, for example, the Kokubu summer festival is held in the Kokubu civic center in the Kirishima city area. A street parade attended by about 6,000 people is the highlight of the festival. In August, the Descendant of the Sun-Goddess advent Kirishima festival is held at Kirishima-jingu Shrine. Information for these festivals and the trail can be found at www.city-kirishima.jp.

It was quite a tight schedule to experience these courses in three days, but when I got back on the plane to fly to Incheon Airport, I thought of what I had in Kyushu and soon I saw the images of the friendly faces of people who always said, “Ohayou,” when I faced them during trekking, living in the beautiful sites of Kyushu.