Agencies seek $9.6B boost in welfare spending for 2014

Agencies seek $9.6B boost in welfare spending for 2014 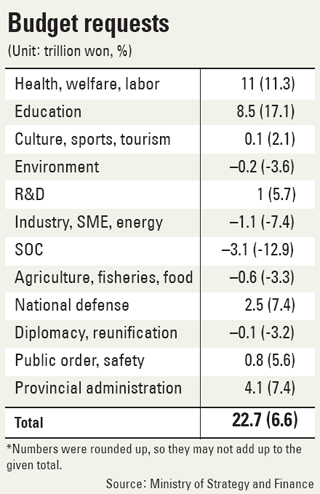 In accordance with the Park Geun-hye administration’s pledges to improve the nation’s welfare benefits, government expenditures on welfare plans are expected to increase next year.

According to the Ministry of Strategy and Finance yesterday, agencies governing welfare policies requested an 11 trillion won ($9.6 billion) increase in their budgets for next year.

The increase includes growth in support for a senior pension fund given to 70 percent of the population aged 65 and older, national scholarship programs, public housing and four national pension funds.

“The ministry plans to draw a budget that is focused on executing the government’s main policies,” said Kang Seung-joon, a director at the budget bureau at the finance ministry. “The next year’s budget plan will be made in a way to support projects that establish an environment for creative economy and encourage job growth.”
The total budget for next year is expected to be 364.7 trillion won, up 22.7 trillion won or 6.6 percent from this year’s 342 trillion won, the finance ministry said.

The finance ministry expects the total budget for SOC to drop 12.9 percent to 21.2 trillion won next year.

“During the last administration, the government made excessive SOC investments in order to overcome the 2008 financial crisis, so it is normal to cut back on the spending,” said Kang.

For industries, small businesses and energy developments, the government is also expected to cut the budget by 7.4 percent to 14.4 trillion won next year.

“The government, however, will draw up supplementary plans to prevent severe contraction in those sectors due to the budget cuts,” Kang added.

To jibe with the government’s creative economy initiative, the budget for R&D is forecast to increase 5.7 percent to 17.5 trillion won.

In order to finance the increased budget next year, the ministry will examine and adjust each spending item by reducing tax exemption benefits.