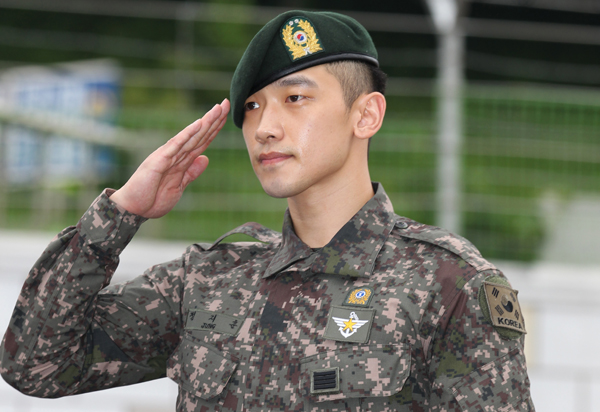 Singer Rain, who real name is Jung Ji-hoon, completed his mandatory military duty yesterday after serving for 21 months. About 800 fans, many from around Asia, gathered at the camp gate to cheer the singer and congratulate his discharge.

Even though many Korean celebrities use their discharge from the military to reconnect with fans and promote themselves, Rain just hurried into a vehicle after a few short words.

“Thank you all for coming,” said Rain stiffly. “I’m always thankful and will strive to do my best.”

The brevity and small scale of the event is believed to have stemmed from the controversy caused by fellow celebrity enlistees to the Defense Media Agency, Seven (real name Choi Dong-wook) and Sangchu (Lee Sang-chul), who reportedly drank alcohol and went to a massage parlor late at night on June 21.

The two celebrity soldiers were caught behaving inappropriately after performing at an event marking the 63rd anniversary of the start of the 1950-53 Korean War.

Rain also served with the Defense Media Agency from March 2012. Before that, he had been an assistant drill instructor since enlisting in October 2011.

However, the Ministry of National Defense said last week that Rain was not involved with the other celebrities’ controversy and is not part of the ongoing investigation into his fellow entertainment soldiers. 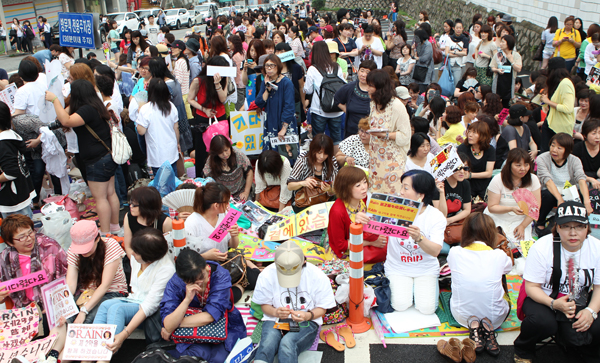 Around 800 fans gather to see the singer Rain discharged from military duty yesterday, in front of the Ministry of National Defense, in Yongsan, central Seoul. [NEWSIS]

“We understand that Rain didn’t get a chance to eat with his fellow soldiers but ate with other high-level officers and then went to sleep,” said a spokesperson at the Defense Ministry.

“Even if he had some alcoholic beverages during a meal, we have concluded that such would have happened under the surveillance of high-level officers.”

The other two soldiers are still under investigation and the ministry said it has extended the probe, which had been scheduled to be completed last week.

In January, Rain was caught violating military rules, repeatedly meeting his girlfriend, actress Kim Tae-hee, while on duty. Rain was also seen on duty without wearing his military beret.

After he left Yongsan, Rain went straight to a cemetery in Paju, Gyeonggi, where the ashes of his late mother are held in a local columbarium.

An official who accompanied Rain was quoted as saying that Rain spent about 20 minutes praying quietly as if he was talking to his mother.

Rain’s mother passed away in 2000 from complications related to diabetes, because the family was too poor to afford proper treatment.