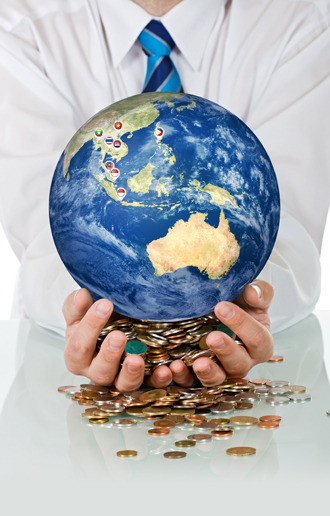 Following the successful export of Korean products in such areas as K-pop music, cosmetics and smartphones, the government wants financial institutions to attempt their own “Korean wave” in finance. They are encouraging them to spread their expertise and best financial practices abroad, specifically to Southeast Asia, as a part of the government’s attempt to build a “creative economy.”

The push for a Korean wave in finance became evident when Financial Services Commission Chairman Shin Je-yoon said at a briefing for the National Assembly’s National Policy Committee in April that local financial institutions should find a new revenue model in Asian markets where Korean culture has become hot thanks to K-pop, television series and other elements of Hallyu, or the so-called Korean Wave of cultural exports.

“Emerging countries in Asia have a vast interest in our economic development experience and financial infrastructure, which have served as a driving force of the country’s economic development,” Shin said. “Based on an excellent financial infrastructure and?the successful crisis management experience we gained from the 1997-99 Asian financial crisis, we will push forward the spread of a Korean wave in the finance sector and the Asian market will be a beachhead.”

In a meeting with chairmen of financial groups in May, Shin said the government aims to boost the financial industry so it can make bigger contributions to the Korean economy by creating more value-added businesses.

“We will expand the share of added value created by the financial sector to our economy to the 10 percent level in the next 10 years,” Shin said.
In the mid-1990s, the financial industry’s contribution to the Korean economy was in the 6 percent range and in 2005 it reached 6.9 percent. However, since the mid-2000s, the share has remained largely unchanged.

The number of overseas branches run by local banks, for example, is now growing after many were forced to close due to the Asian financial crisis of the late 1990s.

According to the Financial Supervisory Service, there are a total of 139 overseas branches of financial institutions as of the end of 2012, up from 112 in 1999.

Market analysts, however, said more overseas branches are needed given that the banks ran 257 branches around the world in 1997. 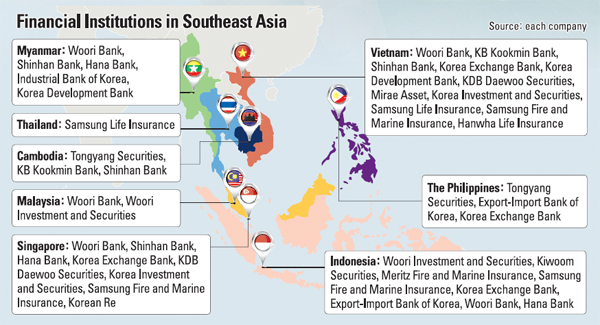 In search of gold

Local financial institutions including banks, brokerage firms and insurers have aggressively sought global expansion to diversify revenue sources and find a new growth engine as the Korean market is pretty much saturated.

“Banks are so desperate to generate extra revenue outside Korea because there are so many limits to growing their businesses here and profits are dwindling with the prolonged low-interest rate trend,” said an industry insider at a bank. “They earned a combined 1.8 trillion won ($1.58 billion) in net profit in the first quarter and that is actually 44.9 percent lower than the year before.”

Shinhan Bank, which opened an office in Yangon, Myanmar in April, aims to create a financial belt in Asia by acquiring an Indonesian bank in the future.

It already runs 65 branches in 15 countries including Vietnam, Cambodia, Singapore, Uzbekistan and India. ?

Woori Bank, which opened an office in Sydney in April just five months after cutting the ribbon on a San Paulo operation, plans to establish more branches in Russia, China, Indonesia and Bangladesh this year. Woori has 62 overseas branches in 17 countries.

Korean banks’ net interest margins in the first quarter were 1.95 percent, much lower than the 2.19 percent of a year earlier.

KB Kookmin Bank, which runs 15 branches in eight countries - the smallest number among the four financial groups - has signed a memorandum of understanding on banking cooperation with Bank Mandiri in Indonesia to secure a foothold in that market.

The situation of local brokerage firms is even worse. They made a total net profit of 1.24 trillion won in 2012, 43.9 percent lower than in 2011. Fifteen out of 62 brokerage firms were in the red last year, nearly a quarter of the industry.

The situation of credit card and insurance companies is similar.

“The low interest rates have cut the profitability of financial institutions,” said an official at the General Insurance Association of Korea, “and the financial soundness of insurance companies has been affected.”

KDB Daewoo Securities and Mirae Asset operate in Vietnam, and Kiwoom has an office in Indonesia.

Among insurers, Samsung Marine and Fire Insurance has been most active in penetrating the Southeast Asian market. It operates in Vietnam and Indonesia.

“The Korean economy has already entered the low-growth and low-interest-rate era and the saturation in the domestic market situation?is getting tougher year by year,” said Seo Byeong-ho, a research fellow at Korea Institute of Finance. “And competition in the domestic market is hotter with foreign financial institutions entering the market. In order to secure sustainable growth and search for a new growth engine, global expansion is very crucial.”

Seo said Switzerland’s UBS and Germany’s Deutsche Bank saw a decrease in operating profits in their country from 1999 to 2006 but managed to overcome that through profits generated from overseas markets. 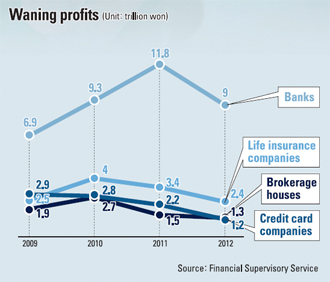 Despite the will and the need to go abroad, financial institutions still struggle to expand their footprints overseas.

An April survey by the Korea Chamber of Commerce and Industry showed seven of 10 financial companies that entered overseas markets are not making as much profit as they expected. The business lobbying group surveyed 72 companies and 69.4 percent of respondents said last year’s overseas profits were less than 3 percent of overseas sales.

Only 2.8 percent said their overseas profits were 10 percent or more of sales last year.

Financial institutions said a lack of information is the biggest hardship they face when opening offices abroad.

According to statistics by the Financial Supervisory Service, assets of banks’ overseas branches amounted to $69 billion as of 2012, 4 percent of their total asset value.

“This means 96 percent of their operations are concentrated in the domestic market, which leaves more room for banks to go global,” said an official at the FSS. “Over the same period, Citibank and HSBC’s assets in overseas markets make up 50 percent.”

At the end of last year, the Transnationality Index for local banks was abysmally low at 3.8 percent.

The TNI measures foreign assets, overseas sales and the proportion of foreign employees and is used as a gauge of the globalization level of companies.

In contrast, European banks such as UBS had a TNI of 77 percent, followed by Deutsche Bank’s 75 percent and HSBC’s 65 percent. Japanese banks, too, had higher TNIs compared to Korean banks. Mitsubishi UFJ Financial Group’s TNI came in at 29 percent, much higher than the Korean Exchange Bank’s 11 percent, the highest of Korean institutions.

Analysts say Korean financial institutions need to get more aggressive in expanding their presence in the Southeast Asian market because competition with Japan is growing.

According to market observers, Tokyo Mitsubishi UFJ Financial Group bought a 20 percent stake in VietinBank in December 2012, the biggest Japanese investment in a Vietnamese bank.

Vietnam has been gradually opening its financial sector to non-Vietnamese banks since joining the World Trade Organization in 2007.

Market observers said Japanese banks have a reason to be more aggressive than Korean banks in expanding into Southeast Asia. Their net interest margin has been stuck below 1 percent for a long time.

They say the Japanese generate about 10 percent of revenue from overseas markets annually, double the percentage of Korean banks.

Some Korean financial institutions have already tried the aggressive approach.

“For a successful global expansion, Korean financial institutions need to adopt a two-track expansion strategy by using the conventional way of entering overseas markets by opening branches and adopting the new way of acquiring financial institutions abroad to seek full localization, just like how Standard Chartered and Citibank entered the Korean market,” said Kim Woo-jin, a research fellow at Korea Institute of Finance.