Woes past, Ivy climbs back

Woes past, Ivy climbs back 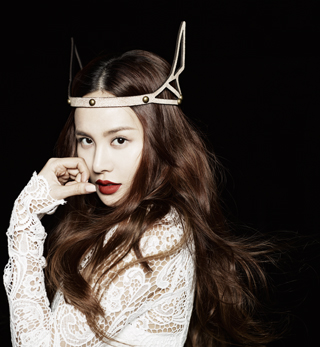 The singer Ivy showed that she is still a major player in the music industry last month, thanks to her most recent hit single, “I Dance.” With powerful dance moves inspired by the tango, Ivy received rave reviews calling her one of Korea’s best solo female singers.

Such reviews were most welcome, coming after a series of legal disputes and financial troubles with her former management agency, which had been going on since 2010. She said in an interview with Ilgan Sports, an affiliate of the Korea JoongAng Daily, that she even suffered from light depression, although she was able to emerge from it quickly due to her bright personality.

To make her comeback, Ivy returned to her roots, working once again with Park Jin-young of JYP Entertainment, the producer who launched her on the way to stardom in 2005 when he produced her debut song “What Happened Tonight.”

Q. Why did you work with Park Jin-young again, after eight years?

A. The agency I’m in has one official that came from JYP Entertainment, and that person acquired the song. I didn’t know in the beginning that it was Park’s. I like the fact that the song wasn’t about seduction; it was good to get out of the stereotypical combination of sexy dancing and provocative lyrics.

Yes, no kidding. There is no break in the song from the beginning to the end and there is no chorus. I felt like dying, as I had to dance endlessly at the same time. It was hard for me to finish the song when I first practiced performing it live. After practicing for about two weeks, I started to get used to it.

You have been posting unflattering photos of yourself on your online blog. Why did you start your blog?

I started it in October 2010, around the time I started a legal suit with my former agency. As I took a break for a long time, fans were curious about my life. So I talked about cooking, which I find very interesting. And I posted those odd photos, I think because I have felt pretty dorky, ever since when I was young.

Do you think you have changed since you moved to your current agency?

Yes, the agency I was working with was very authoritative and bossy. Because I’m more of a cheerful character, it was hard for me to hide my personality. But, I’m also thankful for the opportunity as it helped me make the sexy-yet-mysterious image that I have.

What do you do about rumors?

I try not to care. I don’t know if I have some kind of common face or if many people have plastic surgery to look like me, but people always say they’ve seen me here or there.

Speaking of plastic surgery, do you want to get anything done?

I’ve thought about it. I would like my jaw line to be more of a V-shape. However, I don’t actually want to do it. My face is not entirely natural, but I haven’t done anything for a long time. I think I look different from when I just made my debut, but that is mostly because I’ve changed my image. Now I just want to age with this face.