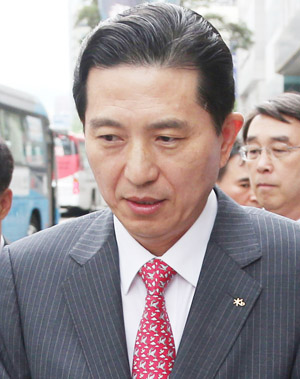 Lim Young-rok, president of KB Financial Group, will officially assume his new post as chief of the country’s fourth-largest financial holding company today. Under Lim, KB Financial is expected to be streamlined to enhance organizational efficiency and heads of its affiliates also will be replaced.

In early June, Lim was named KB Financial chairman over three competitors. The nomination came after Euh Yoon-dae, his predecessor, said he would not seek a second term once his three-year tenure ended this month. Euh resigned amid continuous outside pressure to step down under the Park Geun-hye administration. Euh is a close associate of former President Lee Myung-bak.

According to reports, heads of KB Financial affiliates - including Kookmin Bank and KB Card - are expected to tender their resignations this week and Lim is reportedly planning to appoint their replacements next week.

Industry insiders note it is a crucial time for KB Financial and its affiliates not to be swayed by external difficulties facing the financial industry and build a strong foundation for growth.

“No decision on the Woori issue has been made,” said an official from KB Financial.

Meanwhile, Euh yesterday gave a farewell speech as he stepped down.

“I’m leaving with much still to be accomplished,” Euh said. “Various efforts to establish a foundation for sustainable growth by diversifying businesses haven’t yet borne fruit.”

Euh said he was relieved the baton will pass to Lim, who for three years managed the company with Euh as president.

The Financial Supervisory Service is expected to decide next month whether to take disciplinary action against Euh for not properly managing and monitoring the group.