North Korea’s economy expanded at the fastest pace since 2008 last year, even as the Kim Jong-un regime faced increasing isolation over its missile and nuclear weapon tests, according to the Bank of Korea.

Gross domestic product in the North increased 1.3 percent in 2012 after a 0.8 percent rise in 2011, according to calculations released by South Korea’s central bank yesterday. The North’s economy contracted in four of the last seven years, the BOK data showed.

Last year was Kim’s first full 12 months in power after succeeding his late father Kim Jong-il in December 2011. He vowed in April 2012 that the country’s 24 million people will “never again tighten their belts,” days after an unsuccessful ballistic missile test that ruptured a deal with the U.S. for 240,000 tons of food in exchange for a moratorium on weapons testing.

“Agriculture and fisheries expanded 3.9 percent due to greater fertilizer use in corn and rice production,” the BOK said in a statement. Hog and poultry production rose 12.3 percent from a year earlier, the BOK said.

Agriculture and fisheries accounted for 23.4 percent of North Korea’s overall economy. This was a 0.3 percentage point increase from the previous year. 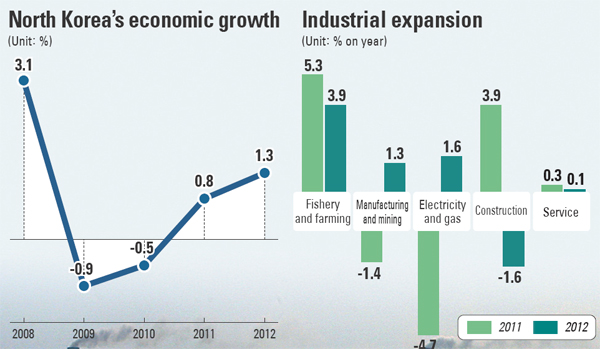 The service industry, however, saw its expansion slowed largely due to a drop in the government sector. Service industries inched up 0.1 percent on-year, which is slower than the 0.3 percent posted in 2011. 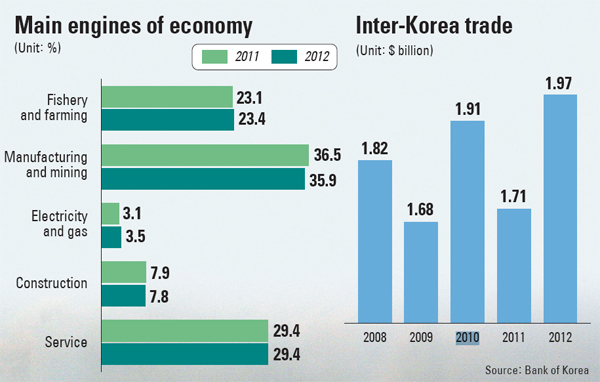 Inter-Korea trade grew 15 percent from the previous year to $1.97 billion. Of the total, 99.5 percent came from the Kaesong Industrial Complex.

Products that came from North Korea went up 17.5 percent, including electronic goods, which surged 25.8 percent while textiles jumped 12.8 percent.

This year these figures could fall sharply as the manufacturing plants in Kaesong have been idle for more than three months.

The data offered a peak into the opaque economy of North Korea, which doesn’t publish official figures. South Korea’s central bank releases annual estimates of the North’s economic conditions based on information from the South’s National Intelligence Service and other related organizations.