Owners pull some goods out of plants in Kaesong

Owners pull some goods out of plants in Kaesong 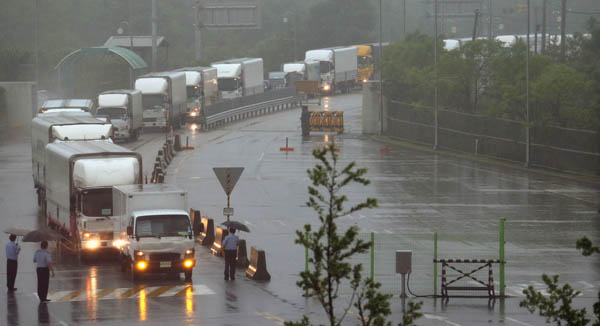 In heavy rainfall, South Korean trucks return home yesterday afternoon through the checkpoint of the Customs, Immigration and Quarantine office in Paju, Gyeonggi, near the inter-Korean border. The trucks brought back finished goods and raw materials from the Kaesong Industrial Complex in North Korea. By Park Jong-keun

Braving monsoon rains, 174 businessmen collected raw materials and finished products from the idled inter-Korean Kaesong Industrial Complex yesterday some 100 days after they were thrown out of their factories.

South Korean managers and employees of 45 electronics, machinery and chemical manufacturers in Kaesong arrived in 123 vehicles to haul away their goods at 9 a.m., according to the Ministry of Unification.

They left for Seoul around 5 p.m. and will continue moving supplies and materials through today.

The businessmen had expressed concern that the summer humidity would damage sensitive machinery in factories that have been stilled since North Korea recalled its workers for Kaesong and the eight-year-old joint venture was suspended over three months.

Between Monday and Tuesday, managers of textiles and shoes factories will have their turns to retrieve raw materials and finished products. The final days for clearing out stuff will be Wednesday and Thursday. The total loss of the 123 South Korean firms at Kaesong is estimated by the government to be about 700 billion won ($622 million), although the owners say it’s at least 1.5 trillion won.

The North and South have held two rounds of talks to reopen the complex. The third round is slated for Monday in Kaesong. Unification Ministry spokesman Kim Hyung-suk said yesterday that Seoul regrets the North’s decision to put off negotiations on reunions of families separated by the 1950-53 Korean War and said that Seoul continues to support talks on restarting family reunions.

“The reunion of families is purely a humanitarian issue that needs to be dealt with as soon as possible,” Kim said, because many of the family members who have applied to be reunited with their loved ones across the border are growing old.

The Unification Ministry yesterday replaced Suh Ho, its chief negotiator in the Kaesong talks, with Kim Ki-woong, head of its Intelligence and Analysis Bureau. Kim will lead the Kaesong talks with the North on Monday.

Pyongyang proposed talks on reunions and the resumption of tours to Mount Kumgang. Seoul declined the latter, saying it wanted to resolve the Kaesong issue first. Pyongyang backpedaled from both sets of proposed talks Thursday.