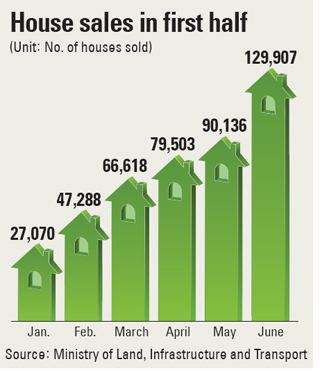 The number of home transactions reached a record high last month as home buyers rushed to complete purchases before the end of a valuable tax break, but negative signs are looming that the housing market will soon freeze up without additional stimuli.

The Ministry of Land, Infrastructure and Transport said yesterday that 129,907 homes were sold in June, up 128.2 percent from a year ago and a 44.1-percent increase from May.

The land ministry said that this was the largest number since December 2006 when 137,848 homes were traded in the market. It is also a monthly sales record for June.

By region, home transactions in the Seoul metropolitan areas increased 158.6 percent year-on-year as 52,790 residences were sold. In particular home transactions from three core districts - Gangnam, Seocho and Songpa - increased 215.4 percent year on year. The three districts are considered a barometer of the nation’s housing market as they are the most popular residential areas in the country.

By housing type, apartments led the way with 94,647 transactions, an on-year increase of 155.3 percent.

The spike in sales is believed to be connected to the end of an acquisition tax cut, which expired as of June 30. The government temporarily halved the acquisition tax rate, but it recently decided not to extend the tax break.

The ministry also believes that the government’s April 1 real estate stimulus, which offered tax breaks for home buyers, further helped the increase. The government waived capital gains taxes on homes that are worth up to 600 million won ($533,689) or smaller than 85 square meters (914.9 square feet).

Experts said that the housing market will likely fall without additional stimulus measures. Indeed, there are already signs of a dramatic drop hitting the housing market. According to data from Seoul Metropolitan Government, the number of apartment sales for July was 698 as of yesterday - that works out to about 50 apartments sales a day, far less than last month’s more than 300 sales per day.

Declining housing prices are also a concern, with potential home buyers waiting until prices hit bottom before making new purchases. According to Real Estate Serve, a local property information provider, the price of apartments in Seoul dropped average of 0.05 percent over past two weeks. However, the price of jeonse, lump-sum deposits paid in lieu of rent, has gone up 0.08 percent. The jeonse price in Seoul has gone up for 47 consecutive weeks, according to the company.

“Following the end of the acquisition tax break, purchase sentiment has shrunk heavily,” said Kim Mi-seon, a researcher at Real Estate Serve. “The price of jeonse is likely to increase in the autumn when most people prepare for moving.”

The government said that it is considering revising the tax system on real estate to restimulate the market. The land ministry previously proposed easing regulations for remodeling apartments, eliminating the ceiling on apartment prices and abolishing capital gains taxes for owners of multiple homes following the April 1 stimulus package, but none of these have yet passed the National Assembly.

The land ministry is also set to lead tax discussions with the Ministry of Strategy and Finance and the Ministry of Security and Public Administration, but experts doubt whether the three ministries can reach an agreement.

Local business groups have been frequently asking for a reduction in the acquisition tax. The Korea Chamber of Commerce and Industry asked the government to extend the temporary tax break until end of this year, and a report from Korea Development Institute suggested a permanent revision of the acquisition tax rate to end the real estate market uncertainty.