A day in the life of Jasmine Lee

A day in the life of Jasmine Lee 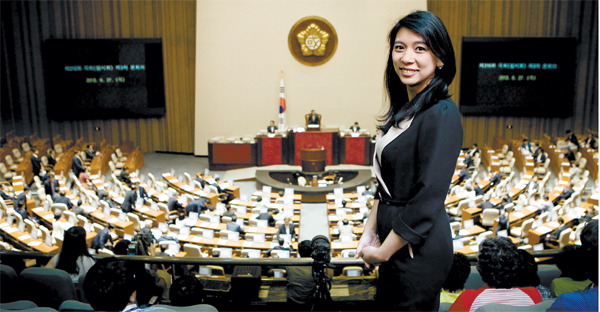 Jasmine Lee, 36, proportional representative of the ruling Saenuri Party and a Philippine-born naturalized Korean citizen, poses on June 27 in the audience section in the main conference hall of the National Assembly. By Kwon Hyuk-jae

It has been over a year since Jasmine Lee, 36, was elected a proportional representative in the National Assembly and the JoongAng Ilbo followed the Philippine-born naturalized Korean citizen for a day as she went about her new life as a legislator.

In the April 2012 general election, Lee made history by becoming the first naturalized Korean citizen to become a lawmaker in the assembly. She is a member of the ruling Saenuri Party.

She became a well-known television personality on KBS 1 TV’s “Love in Asia,” a program dedicated to multiethnic families in Korea and gained a wider spotlight after starring in the 2011 feature film “Wandeugi,” which describes the obstacles faced by a high school student with a disabled Korean father and an immigrant Filipino mother.

In real life, she has two children, including a son around Wandeugi’s age. She is the breadwinner of the family after tragedy struck in 2010 when her husband, Lee Don-ho, had a heart attack and died after saving his daughter from drowning during a family camping trip.

Because of her film background, some assumed Lee would be just another pretty face when she was elected. But Lee proved them wrong.

Over the past year, Lee has sponsored or cosponsored 13 legislative motions, at least one bill a month. Three passed.

She hasn’t missed a single National Assembly plenary or standing committee session, an unusual record for a representative.

A day in the life

On a recent workday, Lee entered the National Assembly Members’ Office in Yeouido, western Seoul, at 9:50 a.m. Often she has breakfast meetings around 7 a.m., but there wasn’t one that day.

“In the beginning, there were representatives who would ask me if I can speak Korean properly,” said Lee, checking the bulletin board while waiting for the elevator. “They don’t do that anymore.”

Last May, she participated in an event celebrating Family Month, and a Korean interpreter was seated next to her.

“It was astounding. I thought to myself,” she said. “Do these people really think that voters picked a lawmaker to make laws for them who can’t speak Korean?”

That’s when she realized there was a wall that had to be broken down.

“For six years, I appeared on television and even in a film, and my thinking that people would know my abilities and have a better understanding of multiculturalism was a mistake,” she said.

Lee had an epiphany. “It can’t be helped,” I thought. “For now, I have to go around diligently and make myself known.”

Three days earlier, she attended an event celebrating the 63rd anniversary of the start of the 1950-53 Korean War. In 2010, Lee participated in the making of a documentary on the Korean War and has become acquainted with war veterans.

Only three other representatives participated in the event.

At 10 a.m., she headed to a Saenuri Party meeting of the special committee on family happiness and subcommittee on domestic violence, as domestic violence is an issue the Park Geun-hye government is trying to tackle. Since there is pressure to come up with a policy by August, the meeting went on until past noon.

Lee took notes throughout the meeting in Korean - she is known to have studied the language on her own, not being able to afford university language courses. She still has some trouble with the Chinese characters used in legal texts.

“At first, I was too embarrassed to ask questions, but now, if there is a word I don’t know, I ask my colleagues,” said Lee. “In many cases, many of them are confused as well.”

Next, she headed off to a luncheon on “economic democratization,” another Park administration initiative. Because she has an outgoing personality, she is close with members of the opposition Democratic Party, including Park Byeong-seug, vice speaker of the National Assembly and In Jae-keun, a Democratic Party representative.

Representative Jung Chung-rae, a DP lawmaker on foreign affairs and the trade committee, said to her, “Next election, our party will nominate you, so let’s work together one more time.”

Lee continued her afternoon heading off to two more meetings. That has been her secret weapon for the past year: participating in all the National Assembly plenary sessions and standing committee sessions that she can. There is only one standing committee meeting she missed, according to records - and that’s only because they took attendance while she was in the ladies’ room.

“As a newly-elected member, I need to at least attend all sessions till the end,” Lee said. “And the most interesting discussions usually come towards the end.”

On June 18, she received an award for lawmakers from a civilian organization.

“When I go to forums or events, people find me strange because representatives usually stay for just the opening remarks and then disappear,” she said. “Since I stay till the end, the event organizers can seem flustered, and they ask, ‘You’re not staying for the meal too, are you?’?”

Ruling and opposition party representatives were especially tense in the days surrounding the declassification of the transcripts of the 2007 inter-Korean summit. Their language reflected the charged political atmosphere.

At first, Lee was shocked when, during questioning, representatives didn’t use honorifics, such as referring to a minister, janggwan, without the suffix nim, which indicates highest respect.

“When I learned Korean, I first learned formal Korean for adults at home,” she said. “It’s still hard for me to use informal language with my kids.”

She also said it was hard to get used to heckling in sessions. “It’s very different from the feeling you get from watching on TV,” she said. “I think there’s a need for another way to butt heads or exchange opinions.”

After several more meetings, Lee’s schedule for the day concluded at 7 p.m. Lee’s office, No. 936, has the highest proportion of female staff: five out of eight are women. Her secretary is a Mongolian woman who used to work for the Gyeonggi provincial government, and her aide is a female rights activist.

Boris Ondo, a 24-year-old who is majoring in international relations at the Hankuk University of Foreign Studies, is working as an intern in the office, and Lee converses with him in English.

While Lee takes seriously her role as a voice for multiethnic families in Korea, of the 13 bills she has proposed, none deal directly with minorities in Korea.

She thinks it’s better to start with small steps, such as tackling international marriage brokers or education about multiculturalism.

When asked if she is leading up to some big surprise bill, Lee said that might backfire. “My presence here already shows great progress [for multiethnic families], but if laws begin to change radically, it might shock the public.”

Last August, Lee proposed a bill to include multiculturalism education in elementary, middle and high schools, as well as among teachers and government officials. The bill was eventually watered down from making it “mandatory” to “encouraging” it.

“At first, I thought of legislation to support multiethnic families but I ran into many problems. I’m not trying to propose an anti-discrimination law because it might prove too much,” she said. “If veteran lawmakers take the lead, I will actively support them.”

Lee’s first choice for a standing committee was the Committee on Culture, Sports, Tourism, Broadcasting and Communications because she believes the media can help change the public’s perspectives.

Her activities with the committee enable her to meet many overseas Koreans. They tell her, “Because you have experienced immigration, we think you can understand us better than any other representative.”

Lee married her husband when he was working as a Korean sailor in the Philippines. She became naturalized as a Korean citizen in 1998 when she had her first child. As she was raising her kids, Lee, who had dreamed of becoming a doctor, started asking herself, “What am I doing with my life?” That’s when she began her TV appearances in 2006.

She tells others who come from foreign cultures or backgrounds, “There are those who need support but I believe you should never get used to receiving. The government can still support the multiethnic population because the number is still low, but if the population increases, the aid will disappear. Self-reliance is important. We have to make it so that they can compete at the level of other citizens.”

Beginning in 2010, kids of multiethnic families are now also required to serve the two-year mandatory military service, and some 2,000 were recruited. At that time, the Defense Ministry asked Lee, “Should we make a separate unit for them?”

Lee, whose son, a high school junior, will head off to serve in the military in a couple of years, responded, “If there is a war, are they going to fight separately?”