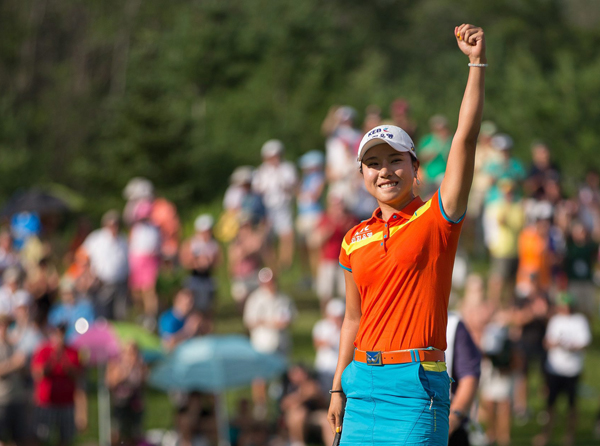 Park Hee-young celebrates winning the Manulife Financial LPGA Classic golf tournament in Waterloo, Ontario, Sunday. Her win is the ninth victory of the 2013 LPGA season by a Korean. [AP/NEWSIS]

Park birdied the deciding hole for the victory after she and Stanford birdied the final hole of regulation to set up a tie.

Both players equaled the LPGA Tour record for lowest total score at 26-under 258. It would take three playoff holes - all on the 471-yard, par-5 finishing hole - before Park ended the drama by making a short putt for her second career LPGA victory.

“When we started [the] final round, I just kept reminding [myself] this is just another round,” Park said. “It doesn’t matter [if it’s the] final round or a first round, keep it simple and just think about always [hitting] my target.”

She hit the target when it counted, reaching the green in two on the deciding hole. Stanford, meanwhile, needed three shots to get on the back fringe and her long birdie putt ended up a few feet short.

Park hit her 45-foot eagle putt to within a few feet of the cup. She hit the birdie, raised her fist in the air and later threw the ball into the grandstand surrounding the green.

The effort capped a remarkable week for the 26-year-old Korean, who recorded a career-best 61 on the par-71 course a day earlier. Stanford closed with a 64, while Park, who had a one shot lead on the American after three rounds, had a 65.

“If somebody would have told me you’re going to shoot 64 today and not win, I would have thought they were crazy,” Stanford said. “So for me to shoot 64-64 on the weekend, you know, it’s good for me but it’s not a ‘W,’ so you play to win.”

Scotland’s Catriona Matthew had a 66 and settled for third place at 23 under. Korea’s Park In-bee (68) finished well back at 16 under, ending her three-tournament winning streak.

Matthew made a move early in the round. She picked up her third straight birdie on No. 7 to move into first place, leaving Stanford and Park a shot behind.

The trio quickly moved ahead of the pack as they approached the turn.

Matthew birdied Nos. 11 and 12, but a bogey on the 15th hole stopped her momentum. Stanford had seven birdies over a bogey-free round, while Park went on a tear with three birdies over her last four holes heading into No. 18.

That set the stage for a showdown that would last about an hour.

Sitting tied at 25 under after 71 holes, Stanford reached the green in two and hit a two-putt for birdie. Park pushed her approach shot wide and hit a nice chip from beside the grandstand to within four feet before draining the birdie putt to force a playoff.

The players hopped into golf carts and returned to the tee to keep playing the hole until there was a winner.

Park had a chance for eagle on the first extra hole, hitting a beautiful approach that bounced once before settling eight feet from the cup. She pushed her eagle putt wide and settled for birdie.

Stanford chipped on from beside the fringe and hit a short putt for a birdie of her own.

On the second playoff hole, both players landed in the first cut beside the green. Stanford went first and chipped it within three feet and Park did the same before both players hit their putts.

Stanford was unlucky on the third playoff hole as her tee shot found the rough and settled into a depression.

“By far the worst lie I had all week,” she said.

She used a four-wood to get out but didn’t hit it clean, with the ball landing in a fairway bunker. Stanford did well to get it to the back fringe but with Park already laying two, Stanford needed to chip in to force play to continue.

When her ball settled a few feet from the hole, Park had the opportunity to go up and down for the victory and she took advantage.

“I did everything I could, it just wasn’t enough,” Stanford said.

Scores were low for all four rounds as players took advantage of wide fairways and greens that remained moist after heavy rain earlier in the week.

Korea’s Lee Mee-na (66) was fourth at 20-under and Karine Icher of France (63) was another shot back in fifth place. American Michelle Wie closed with a 66 to finish tied for 16th place but was still 11 strokes off the pace.